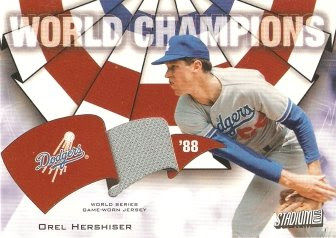 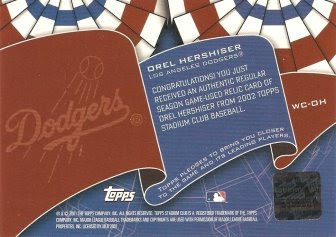 I purchased this 2002 Topps Stadium Club World Champions Relics Orel Hershiser card on ebay some time ago. It is a nice card. My first Game Used card.

I just really looked at the text on the front and the back. They don't quite match.
From the front:

So, which one is it? A World Series Game Worn Jersey or a regular season game used relic? Clearly, it is a card. It is a part of a uniform.
I'm telling myself that it is WS Jersey.
Posted by Mark Aubrey at 8:43 PM