A few weeks ago I received a PWE in the mail. I had come home from work.  Picked up the mail on the way into the house.  Shuffled through it.  Bill.  Bill.  Ad.  PWE.

That caught my attention.  I opened it and these came out.

They were all on my Elusive Eight want list.  After dinner I rushed out to some meeting or rehearsal, thinking that I'd scan and put them away later that evening.

I don't remember what happened.  I guess I forgot about them, or decided to do it later.  The cards were placed back in the envelope and set aside.

I let it go for a few days.  Ah.  That special place where I put the important papers.  That's where I left them.  No.  Inside the cover of that book I want to read next.  Back to the stacks of paper.  Near the other bills.

My wife had noticed that I was actually doing some cleaning while looking for the cards.  That made her happy that I was decluttering, but made me sad that I still hadn't found the.

Time to retrace my steps.  I finally found the envelope.  It had fallen off the stack of a clump of papers, down near my dresser.  They had been found.  There was much rejoicing.

So, kids.  This is a true, but cautionary tale.  Get a system in place to process your cards.  Know where they are.  I don't care if you scan them, blog about them, file them a month or even a year later.  But know where they are.

So, a big thank you to whatever kind and benevolent reader took the time to go through my wantlists, procure and send me these cards.  I'll be a better steward next time.
Posted by Mark Aubrey at 12:04 PM No comments:

I found reference to the Obak baseball cards in an issue of the United States Tobacco Journal from 1909.


I found several different advertisements from 1910 that featured the Obak brand, but I haven't found one for the smokes featuring cards. 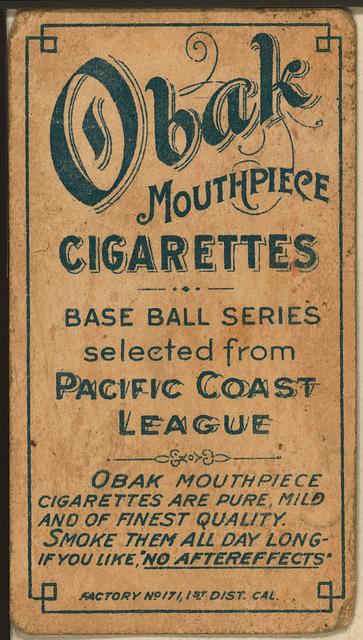