Daniel, from It's Like Having My Own Card Shop, and I recently completed a trade.  I'm impressed with his memory and his generosity.

He picked up a few items from COMC and tossed in a mess of micros.  The Hershiser was on my wantlist and he filled it.  Along with the card of Tommy running with Orel in tow.  What you don't see in that photo is a large buffet table being pulled along like a mechanical hare at a greyhound track.


I'll post up some of the other cards that Daniel sent my way later.  Thanks so very much.
Posted by Mark Aubrey at 9:00 AM 1 comment:

Like I need another player/coach to collect. Well, I'm doing it anyhow.

Del Haris played at Milligan College, one of the schools to which my son has been accepted.  The school from where my wife graduated.

He has a very limited number of cards.  13 by my count.  And one of those is a Panini Sticker.  In Spanish. I don't know if I need that one. That means I'm already 25% of the way there.  Might even be able to finish this collection by the end of the year.  SportLots.com has 8 of the 9 cards I want.  Each for 18 cents.  Yeah, when I add a player, I go big.

And he's got cool hair. 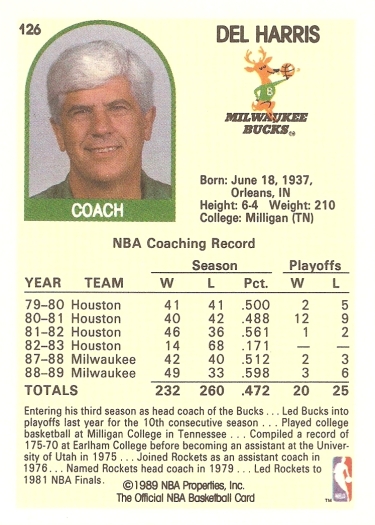 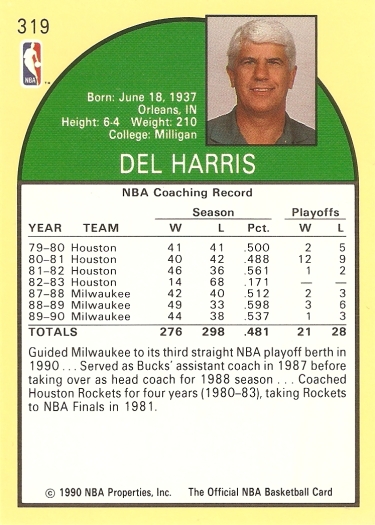 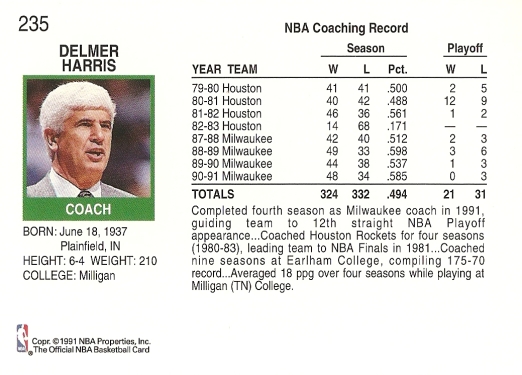 Here's a link to my Del Harris checklist/wantlist page.
Posted by Mark Aubrey at 1:25 PM 1 comment:

I remember picking this up in the early 90s. I'd only been married for a few years. No kids on the way. A card show in the area just about every weekend and junk wax was new wax then.

The apartment we were renting was on the backside of a shopping center.  There was a dollar type store near the chain grocery store.  This was about two dollars.  I thought that it was a fair price for an 8" x 10" picture.

Yeah, this has a mostly blank back. And, yeah, I need to show it. 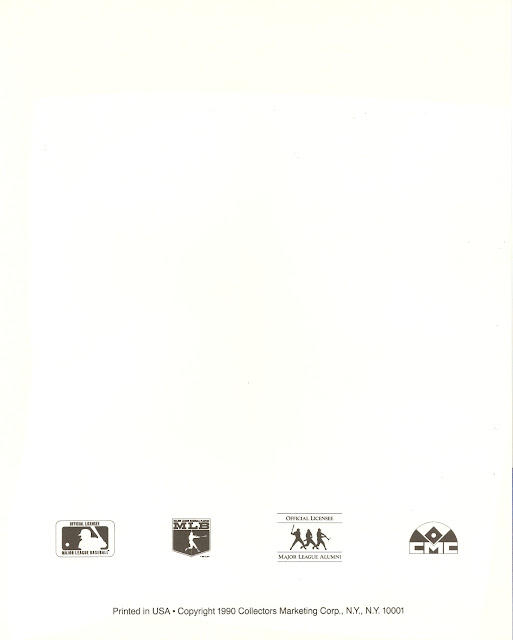 For some strange reason, I clipped out the back of the plastic cover. I guess I wanted to remember what it was.  Good thing I did. 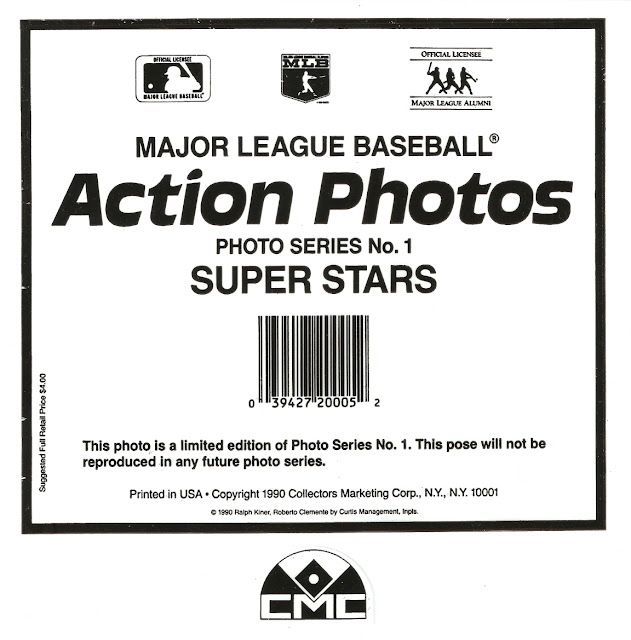 I've got three other of these type of cards, but they're from TV Sports Mailbag.  You'll be seeing them later.

In twenty plus years things have changed.  We've moved from that apartment to a townhouse, bought a condo, moved to a different state and bought two houses.  The kids arrived and now we're college shopping for the oldest.  There hasn't been a card show in these parts in years.

Things change over time.  Except the look on Orel's face when he's in the middle of a pitch.
Posted by Mark Aubrey at 9:51 PM 2 comments:

Back in the late 1980s, when the hobby was bursting out, a still voice in the wilderness provided collectors answers. Here's a column that I found today while perusing the Northern New York Library Network's digital newspaper collection.


That last paragraph?  At least part of it is still true today.  Babe is a feature of The Record Searchlight in Redding, Calif. 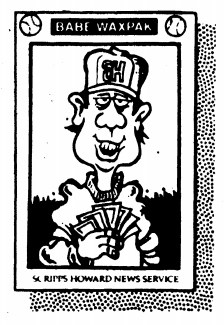 I snagged this image from the Tennessee Smokies facebook page. It was on display at the 2013 Cubs Convention. Can you imagine the wrapper? 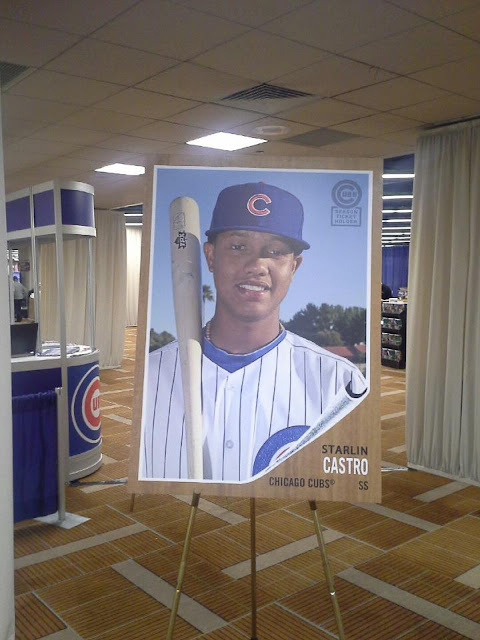 Pimping for a good cause

Old Time Family Baseball is having a blogathon today.  They're posting every half hour.  The reason?  They're trying to bring attention and donations to Doctors Without Borders.

So, expand your blog reading a bit, forego your next two packs, and donate.

UPDATE: as of Monday morning OTFB has raised $3,476 for Doctors Without Borders.  I don't know if my pimping assisted in this or not, but if it did, thank you.
Posted by Mark Aubrey at 9:47 PM No comments:

New (to me) Kevin McHale Cards 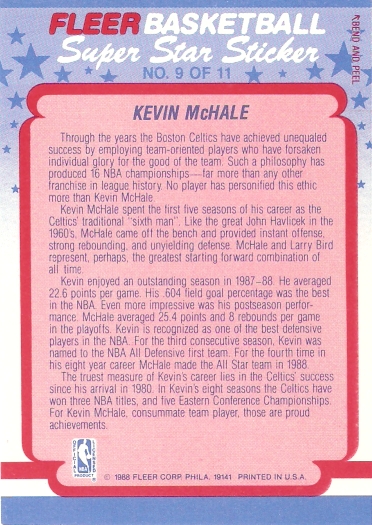 Take a look at the picture on the right side of the back of the Topps card.  That's what it is supposed to be like here in east Tennessee later today. 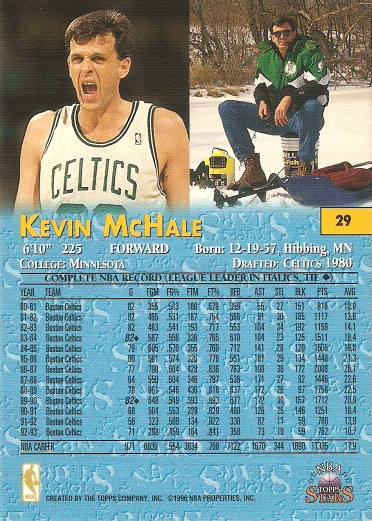 So this is my 800th post.  Four years and three days have I been blogging about sports cards.  It is the beginning of the year, a time for reflection and a time to look ahead.  No contest here kids.  Move along.

I'll get to that.  You all visit for the eye candy, not the words.  So here are a few more New (to me) Orel cards. 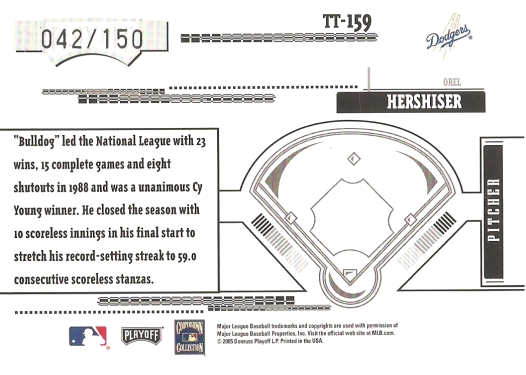 There are also Black and Red versions of this.  I think that the Black is numbered to 100 and the Red is numbered to 250.  And all sorts of auto and relic variations.  Maybe I'll search them out, maybe not. 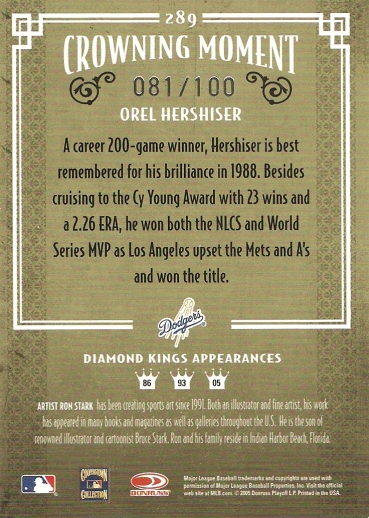 I'm not really sure if the correct subset is "Blue Frame". That's what I'm calling it. I picked it up from COMC because I thought it looked nice.  It has a little frame raised up on the front.  I liked it, so I got it.

That sort of will be the theme for this year.  Not "Ooh, I have a slot to be filled, let me get it" but more of a "I like that, I can afford it, I'll get it" sort of thing.  I'm not going to be hard and fast about it, but this is the year of treating me.

So, let's look back at the past year.

I posted 150 times.  With this post, it brings my January 2013 total to 12.  That equals or exceeds seven months postings from 2012.  Now, there were a few major things happening in my life last year.  My gall bladder decided it didn't want to play nice and it wanted to come out.  Other medical things that happen when one turns 50.  My mother-in-law passed.  It was a busy year.  These are not excuses, but I wanted to put things in perspective.

Now, last year wasn't filled will all sad or painful events.  There were many things worth celebrating.  I was instrumental in forming the East Tennessee Chapter of SABR.  I got to cover the 2012 Southern League All-Star game.  My son scored his first HS touchdown.  My wife and I celebrated 23 years of marriage.  All things of which to be proud.

So, what does this coming year hold?  Let's ask Brian Cox, GM of the Tennessee Smokies...


Yeah, I picked up a digital recorder last year. I figure that I really should put it to use.

What does this coming year hold for cards in my collection?  Let's see.  I joined Listia and have been slowing getting rid of cards that I have that I don't want.  Amazing what people will buy.  I've been picking  up a few card for my player collections from Listia.  Some Hershisers, McHales, and Burtons.  I don't expect to get any Erskines, Wades, or Wilsons.

I'm going to try to get a clear checklist for Jeff Burton cards and for the Kevin McHale cards.  I've been toying with knocking out the Del Harris cards.  There aren't that many of them and I already have a few.

I'd like to do a bit of trading, but I've found that while I might have something to offer someone, they are often stymied as to what to put on the table.  I think that my approach this year is going to be one of, let's agree to trade, but look at my wantlists, find something there, order it from COMC, SportLots, ebay, whatever next time you're buying some cards.  When it comes in, send it to me.

I'm not planning on buying new cards in 2013.  My wife likes to pick me up a pack a few times a year.  I'll take those, but I'm not chasing new sets.  I'm not really a set guy.  I'll probably be involved with Gint-A-Cuffs again this year.  I thought that it went rather smoothly last year.  Heck, what's another year.  Now, just to come up with a catch title, find some graphics, ask Topps to assist with the prize, update the rules.  That sounds like a lot of work.  Maybe I should bag it for 2013.

Saturday was a baseball filled day.  I led a SABR meeting and then attended a signing by Tony Campana.  Eddie Barkley, from Sports Treasures, put the thing together.  I've posted about Eddie's shop before.

Tony and I are (very) distant cousins, by marriage.  Speaking of marriage Tony will be tying the knot in December.  Somehow I don't think I'll be asked to be his best man.  Or even an usher.

It was a free signing and Eddie had several photos of Tony, cards, balls, bats, Cubs pennants.  You name it, he had it.  Tony was very gracious with his time, posing for lots of pictures. 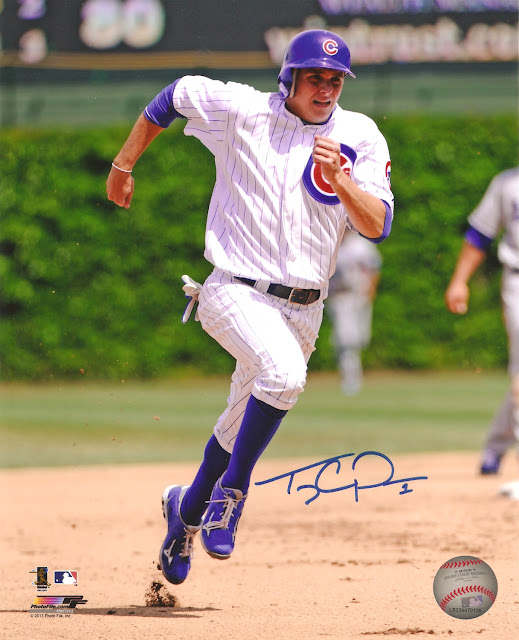 Tony was kind enough to be interviewed about his collecting habits.

New (to me) Orel Hershiser cards

A few more cards from the COMC splurge. Yeah, this is going to go on for a while. Just be thankful that my recent ebay purchase of 125 different Jeff Burton cards hasn't yet arrived. 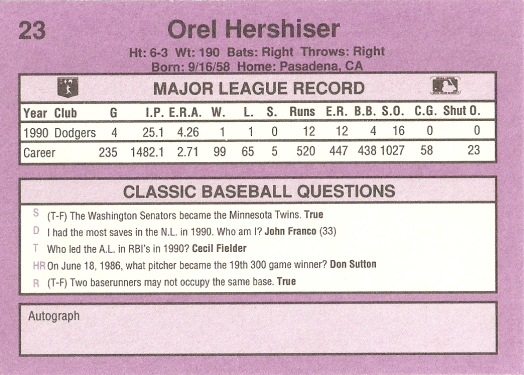 Later I hope to post all of the Classic Games cards of Orel.  Maybe one day I will. 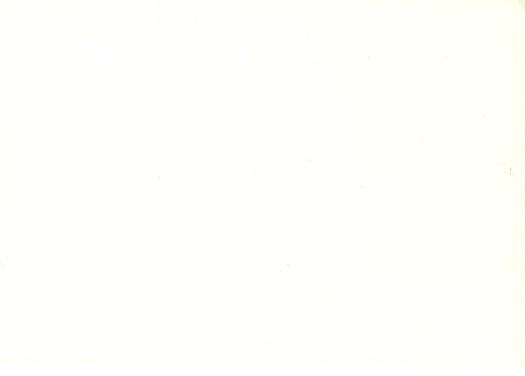 Yes, I know that it is a blank back.  But trying to conform to my standard way of presenting cards (or at least the way I'm currently presenting cards) I had to show it.  It has always bugged me how there is a date range of 1984-89 on the Conlon and Son cards.  Apparently they created them over a period of years.  I'd just really like to know when this one was issued. 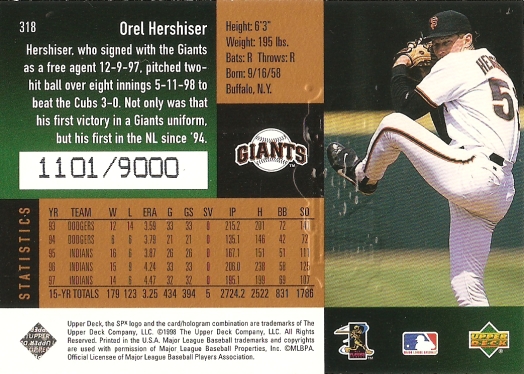 Oh, the vagueness of parallel inserts.  I've been waffling a lot on whether to collect parallels or not.  Shouldn't base cards be enough?  Maybe this one is the base card and the Radiance and Tradewind cards are the parallels.  I have no clue.
Posted by Mark Aubrey at 11:00 AM 1 comment:

New (to me) Jeff Burton card

Another card from my COMC haul. I was trying to round out the purchase and I hadn't selected any racing cards. This one fit the bill. I think that it was 50 cents, shiny and sparkly, die cut and just over the top. And I didn't yet own it.  Now I do. 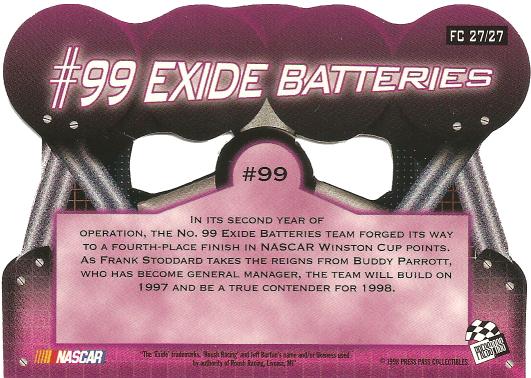 I'm rethinking my Jeff Burton collection.  With racing cards there are many different cards produced.  One can select from driver cards, car cards, helmet cards, team cards, hauler cards.  I might focus on just the driver cards.  It would make things much easier.

New (to me) Earl Wilson cards

Trying to round out some of my player collections.  Yesterday it was Bill Wade.  Today is back to baseball with Earl Wilson.  Both cards are from COMC. 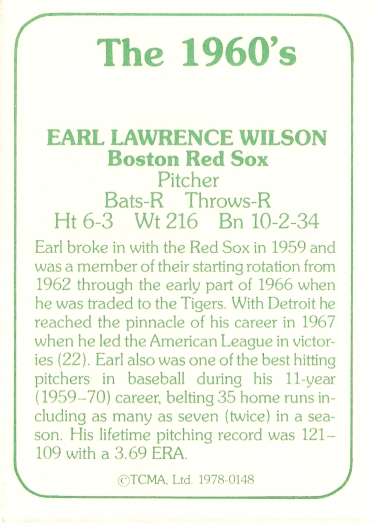 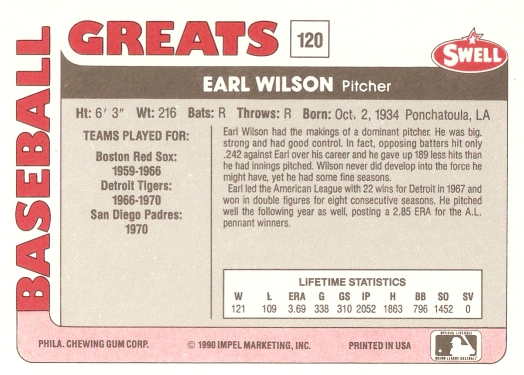 Like yesterday, I updated my Earl Wilson wantlist page.
Posted by Mark Aubrey at 9:00 AM No comments:

New (to me) Bill Wade cards

I dipped my toes in the COMC waters. It was still and warm. So I stepped in. I'm glad I did, because I picked up four more Bill Wade cards. 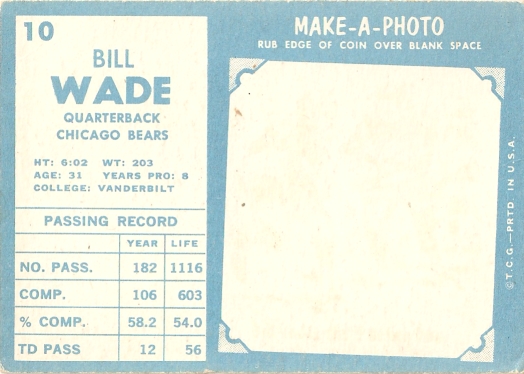 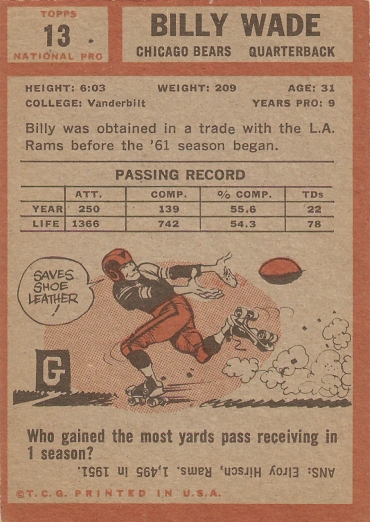 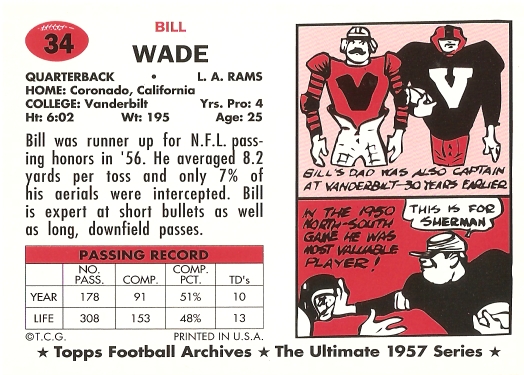 I'm settled in with my can of caffeine free Coke, left over Christmas candy, and the TV remote to turn the sound up. 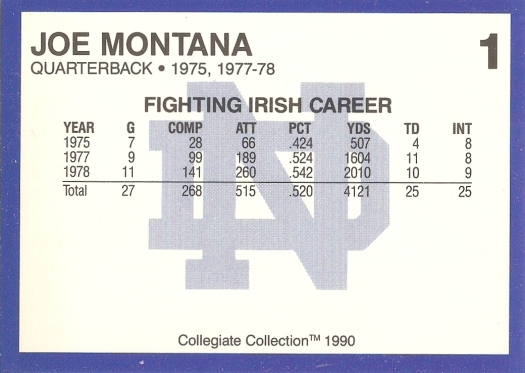 Being in SEC country, I feel that I have to root for Bama.  Besides, I don't like the way that NBC has tried to force Notre Dame down our throats as "the team that America should love" for the past decade and a half. 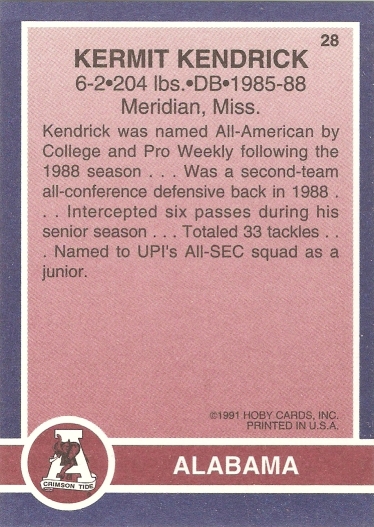 Is anyone else going to watch?  And who are you rooting for?

For whom are you rooting, if you're so inclined to that line of questioning.
Posted by Mark Aubrey at 7:34 PM 3 comments: