Grab me a tall boy

By a tall boy I mean a 1994 Fleer Extra Bases. These cards measure 4-11/16" x 2-1/2".  I finally was able to obtain an Orel Hershiser from that set via Listia.  499 credits, free shipping.  Now if Ultra-Pro would make a page for these, I'd be a happy camper.  Into the over-sized pages with the other oddballs, Mr. Tall Boy. 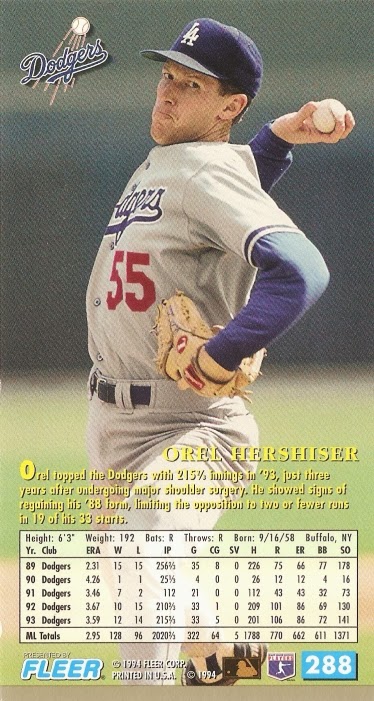 There were eight other cards in that lot.  They look good, but I don't really have a use for them.  They'd make great bookmarks.

I got a Barnes & Noble gift card from my sister-in-law and her family for Christmas. What did I buy? Well, here's one book... 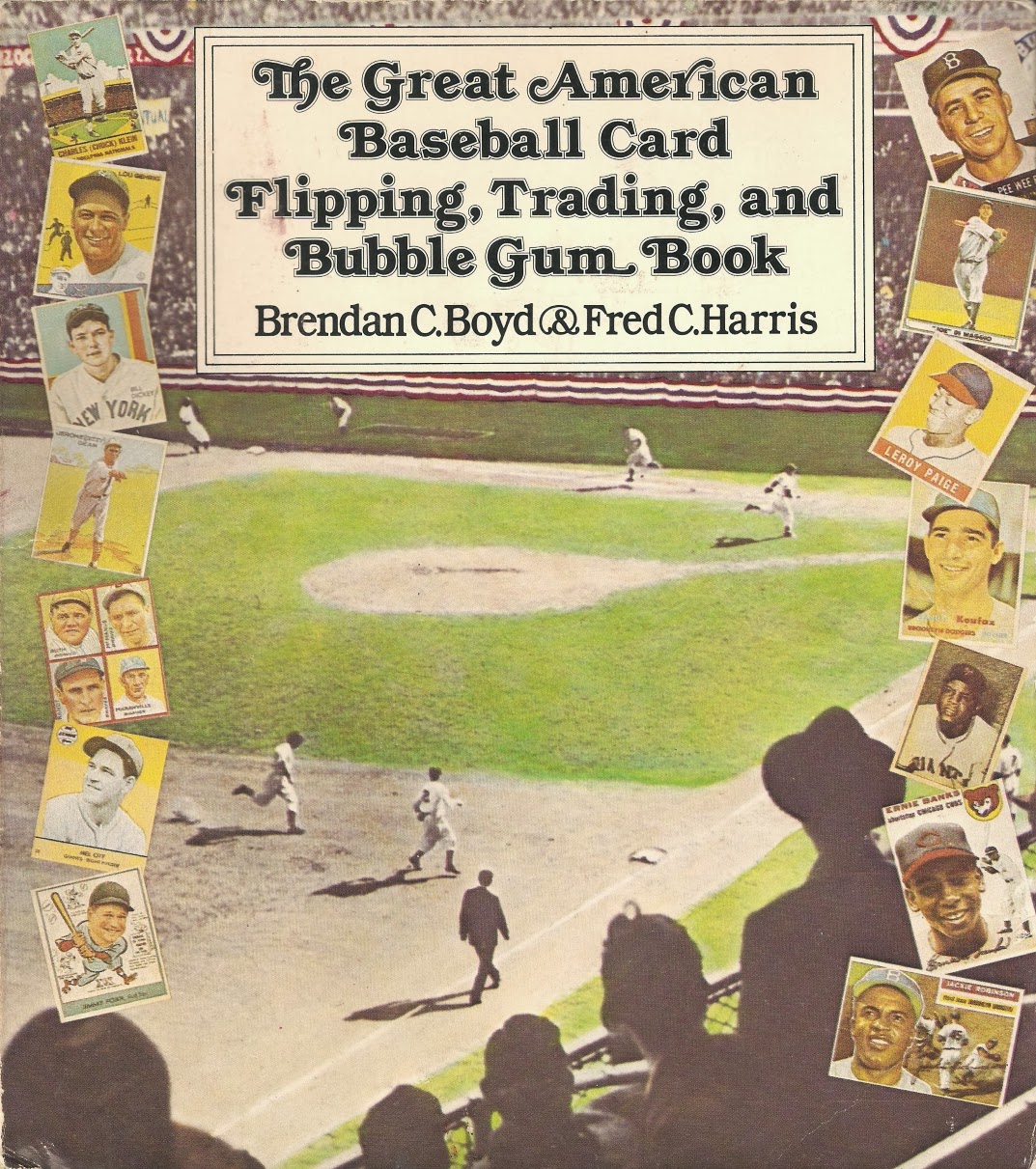 It is a paperback and the copyright date says 1973.  I don't know if that's the copyright for the book or this printing.  The trip through the postal service had worn the thin cardboard envelope through to the book binding and it had scuffed one of the edges.  At first I got a bit irritated.  But then I realized that this book, like older baseball cards, will get some wear and tear.  I'm okay with that.

Here's a review of the book from 1974, just before the baseball season opened...
Right now the book is sitting by my bed in a stack of other books I'm getting ready to read.
Posted by Mark Aubrey at 12:40 PM 2 comments:

Mr. Hoyle has been making a name for himself recently in the card blogging world. Well, he already had a name. He's making it known. As one who comments and one who gives.  He sent over a few cards to help me out of a "too many Royals" jam for my Topps Type Collection.

Let's see who he sent and who gets the boot.  Bespectacled Paul Splittorff will replace John Wathan.  Wait.  That's just one Royal replacing another Royal.  Yes, soon you will see the wonder that is Mr. Hoyle's brain.
Rick Sutcliffe came along for the ride.  Unlike the peasants of France I don't want to replace all my Royals, just not have so many of them clumped together.   Rick will have to wait in the bullpen for a while.

Jim Beattie will be replacing Paul Splittorff in the 1984 spot.  See what Mr. Hoyle did there?  He gave Paul a second chance.  And he provided me with a Mariner.  Need to keep the teams balanced.

A young Dennis Boyd.  Dennis will be replacing Charlie Leibrandt.  Another Royal bites the dust.

Roberto Hernandez has been called in for Raul Mondesi.  That fills the Devil Rays team void.  And Raul's card was a horizontal.
Thank you for reading my blog, Mr. Hoyle. And for getting me out of a jam. I can now sleep better at night. Well, during the day, too.
Posted by Mark Aubrey at 9:00 AM 2 comments:

You might be asking yourself, how can a blog post be born of that drivel?  I wondered myself.

I was born and raised in Upstate New York.  The real Upstate NY.  The North Country.  Plattsburgh.  Clinton County.  I'm rather proud of that.  Yes, it does toss a thorn under the saddle when I hear a newscaster say, "Crime spree in upstate NY.  We'll talk to the police chief of Poughkeepsie to see what he's doing about it."  That isn't upstate.  Can I get an 'Amen'?

A pretty rich racing history.  Let's look at a time when the big boys came to race in Plattsburgh.

Bench Racing from the Volunteer State has a nice overview of the events of June 19, 1955, but they didn't have any newspaper articles.  I do.

I call this the edited version because I edited the story.  Not for content but for layout.  Below is what the original looks like.  A bit unwieldy for a blog post.

Does any of this really matter?  Probably not, but it is a bit of a nostalgia trip for me.  A few times each summer my dad would drag my brother and I to the Airborne Park.  Drag wasn't really the word.  We willingly went.  I think that it was called PIR, Plattsburgh International Raceway, in the late 1960s and early 1970s.  We saw Jack Kochman's Hell Drivers, an auto stunt team, a few times.  And racing.  Plenty of racing.  Local boys mixing it up on the track.  Good times.

Credit where credit is due: The newspaper images came from the NYS Historic Newspapers site.

Much to the dismay of the Night Owl I'm going to share a card of Jeff Burton. Look, it has a flag on it. 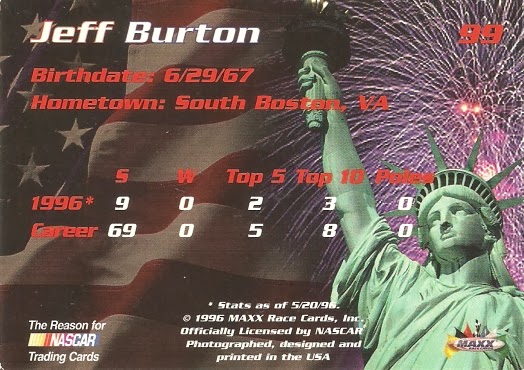 We'll be back to baseball soon enough.
Posted by Mark Aubrey at 11:15 PM 3 comments:

Another Listia pick up.  The cards from 1971 are the first cards that I really remember.   I'm starting to get a soft spot for them.  I've only put together one set and I don't want to start another one, but if I was going to start a new collecting project it might just be this one.  But it isn't. 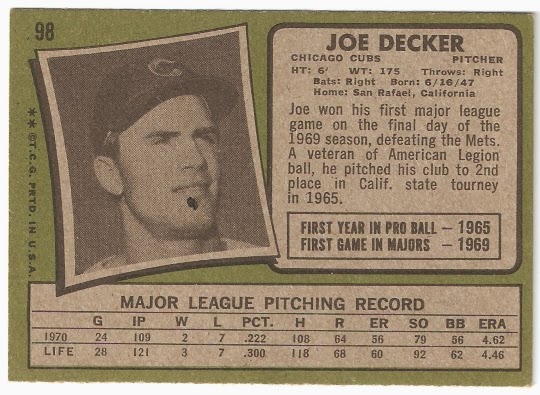 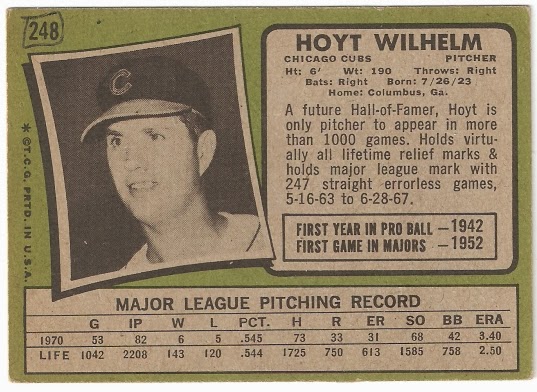 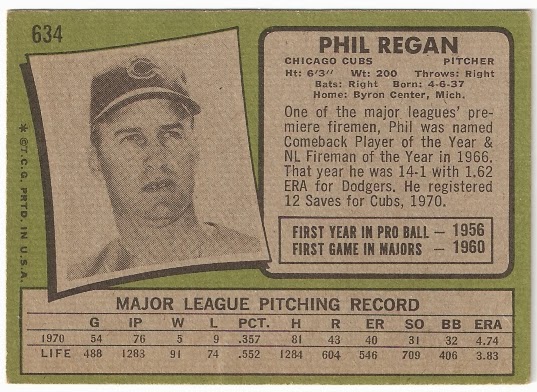 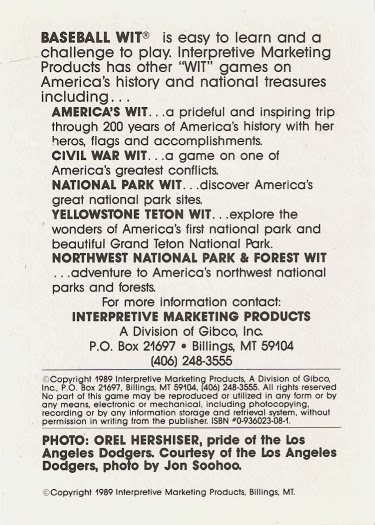 I always thought that this set was from 1989. I was looking at my OH wantlist this morning and discovered that it is from 1990, according to the Standard Catalog of Baseball Cards.

Now why would I think that it was from 1989?  Look at the copyright info on the back of the card. 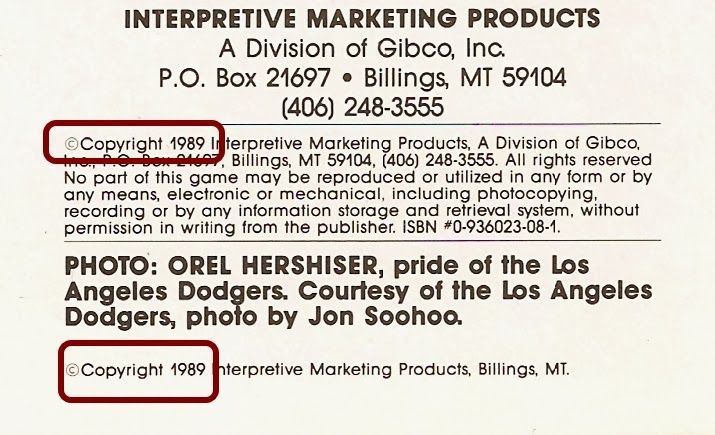 I've already moved the card in my binder to the correct year.  Now I've got to go correct things at Zistle.  And add the numbered version of this card to my want list.

In other news, I went to the post office today to mail out some packages.  Here are the zip code final destinations:

I was looking through Google books for something or other. I really don't remember. Then I got rabbit trailed, chasing what I wasn't looking for.

It led to this nice discovery. An announcement in The American Stationer about a new post card line for 1908 from the Tower Manufacturing and Novelty Company of New York. 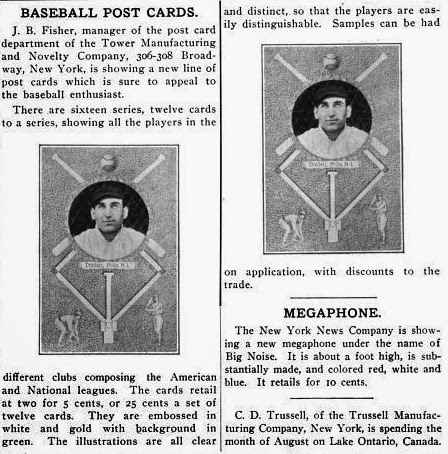 I looked in my copy of the Standard Catalog of Baseball Cards and found several other post card issues from 1908, but no mention of this set.

Based on the description, I tossed together a very quick mock up of what the cards might have looked like. 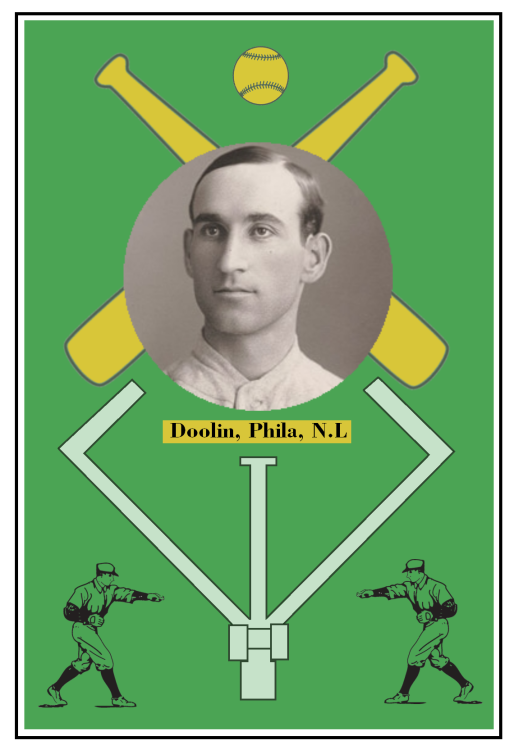 As I look at the mock up I see that I forgot the period after the L in the name box.  And I forgot the bases on the path.  Hey, it is a mock up.  A very quick mock up.  Go purchase a Big Noise megaphone and yell at me.

A bit more post creation research shows that the Rose Company also issued these postcards in 1908 and 1909.  Go to VintageBall.com for their main story or the minor league story on the Rose Company Postcards.

My mock up doesn't do them justice.
Posted by Mark Aubrey at 1:45 PM 3 comments:

Lost... not yet found

I'm getting better as an organizer.  I've got checklists and I'm working on filling them out.  I've physically clumped like cards together (think autos and relic cards in snap cases).  I've culled out cards I intend to send to other collectors.  I've got cards set aside that I need to post to Listia.  I've got binders.  I roughly know what I have and where I'm going.  I feel pretty good about collecting.

And then I went to look for a specific card.  This one.

I can't find it.  I have looked in all my usual hiding places.  I even cleaned off part of my dresser that hasn't seen the light of day in many years.  A few benefits of that.  Dust bunnies went away.  My wife was pleased.  And I found a relic card I had forgotten about.  This one.

It was under a pile of MLB Showdown shiny cards, misc business cards, and old church bulletins.  It has now been put in the right place.

In other news I went by one of my local card shops (yes, I have multiple), and picked up a few more 1970 Topps Supers.  A theme for the week might have been found.

I also took Caroline by to the University of Tennessee campus.  For those readers that are new to my blog, Caroline is my daughter.  She likes sports.  Of all kinds, although recently she's been taking a shine to hockey.

Here are a few photos from today. 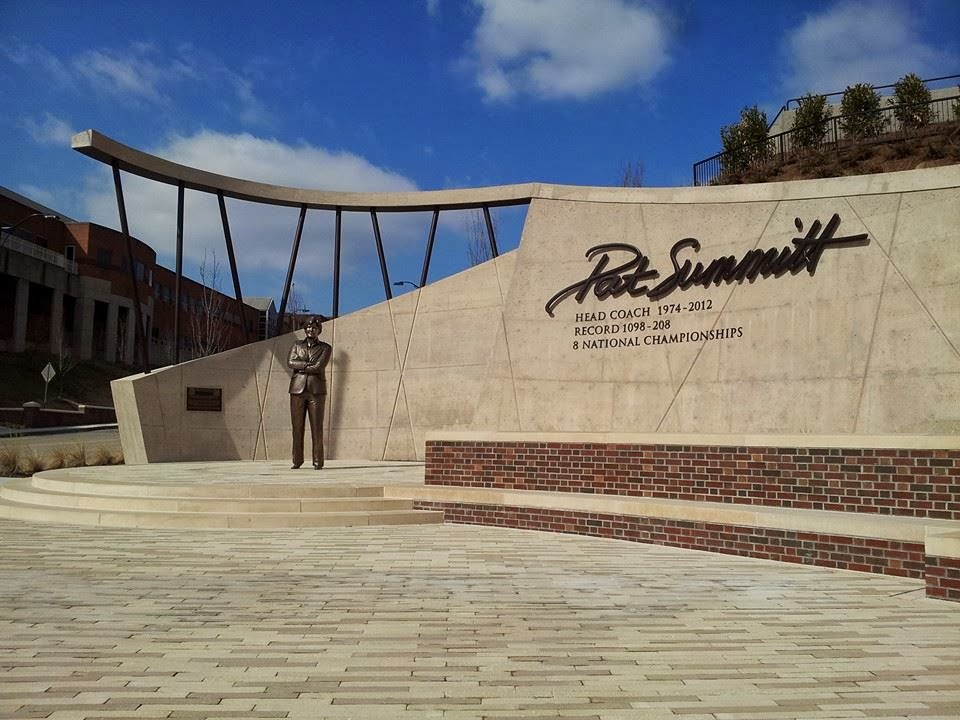 Back in November of last year a statue of Pat Summit was unveiled just across from Thomson Boling Arena. 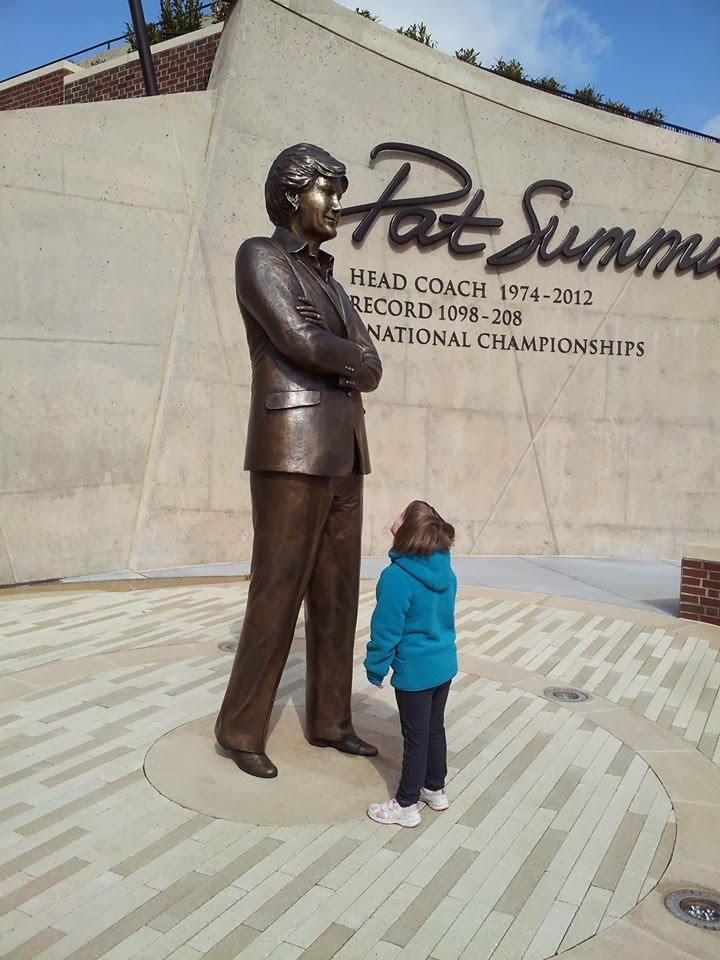 Caroline standing in awe of a great coach. 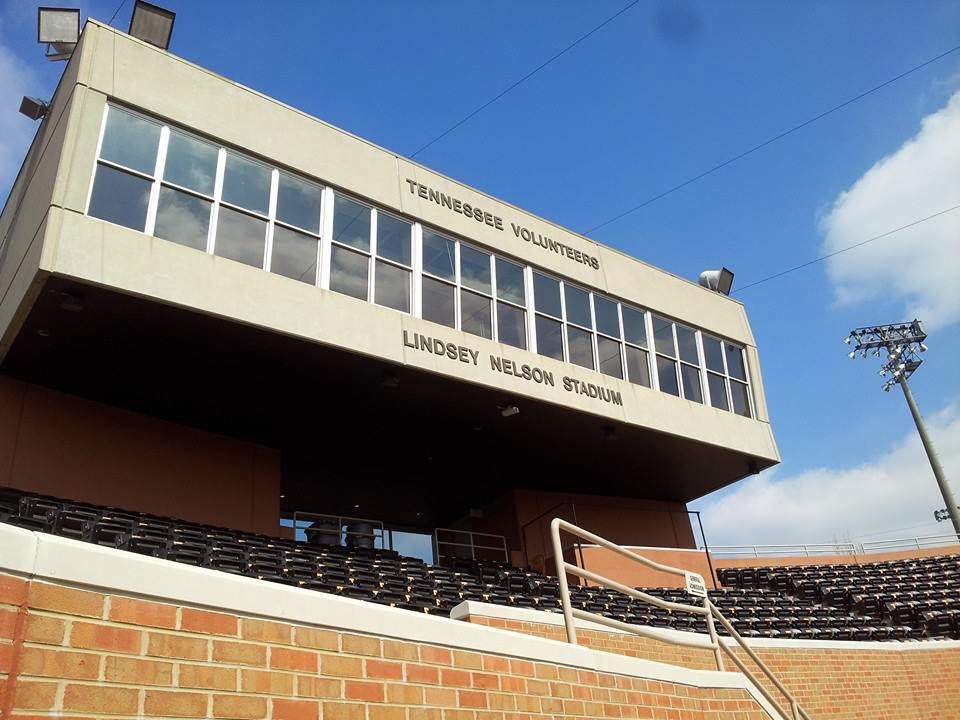 UT was supposed to play host to Nebraska-Omaha and Purdue for a miniature tournament today and tomorrow.  We, along with other parts of the country, got slammed with snow, ice and general weather badness.  Travel delays and concerns for the field led Nebraska-Omaha to withdraw and Purdue to delay.  Today's game was delayed until Monday.  I'll have to wait a bit longer to watch some live baseball. 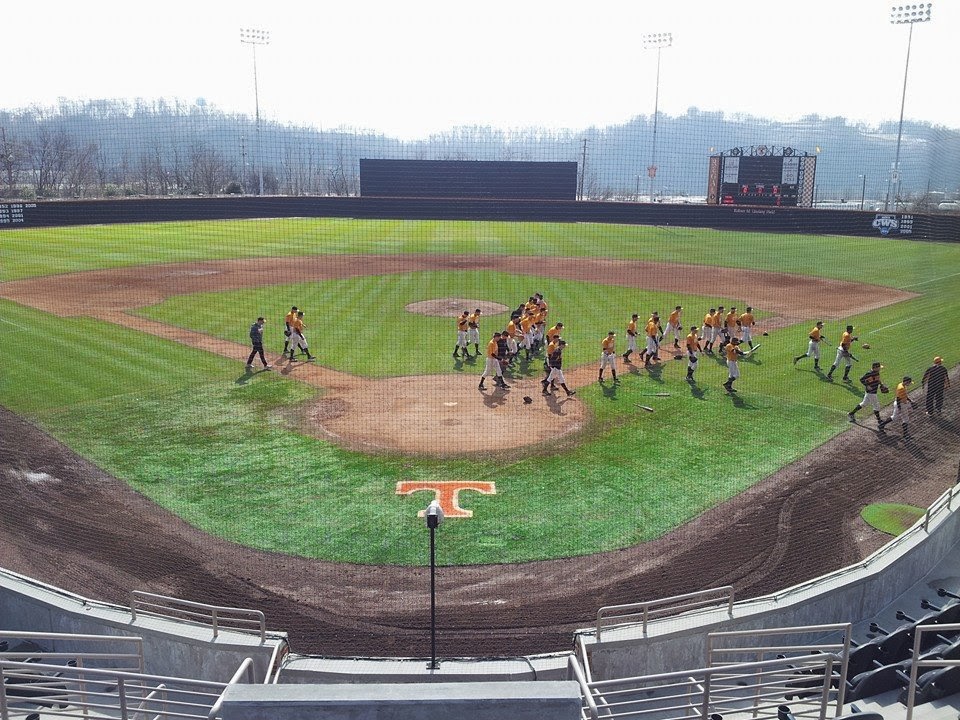 We watched about 10 minutes of batting and fielding practice before the coaches called the team in.  Caroline said she wants to return.  So do I.

Until then I'll keep looking for Ed McNair.
Posted by Mark Aubrey at 9:53 PM 3 comments:

I'm starting to love baseball cards again. I don't know that I ever fell out of love with them, but they haven't really been lighting my fire, if you know what I mean. I even snuck a peek at CardMingle.com to see if I could find a better match.

Nope. In my quest to gather type cards, I thought I'd pick one up from each decade. I didn't have one from the 1920s. Now I do. May I present Mr. Clifton Earl Heathcote. 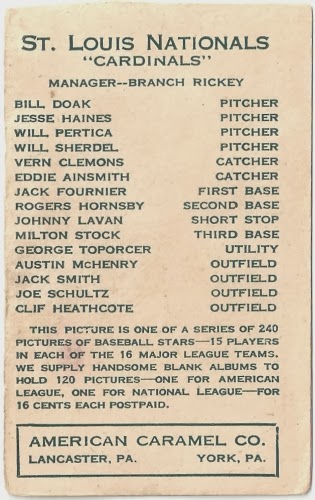 He won my heart and I won the auction.  A bit of surface wear and corner rounding, but I bet you'd have some, too, if you were 92 years old.  Two names from the back jump out at me.  Rogers Hornsby and Branch Rickey.  How would you like to have played with Rogers and played for Branch?  Sorry.  Mr. Rickey.

Not knowing much about Clif Heathcote, I looked him up at Baseball-Reference.com.  18 seasons in the majors, starting with the Cardinals, then moving to the Cubs, the Reds and finishing with the Phillies.

His last game in the majors was on September 24, 1932, where he pinch batted in the 5th inning.  He didn't connect.

His last hit was on September 16, 1932, where he pinch hit for Ed Holley in the 9th and got a double off of Cub's pitcher Bud Tinning.  The Phillies lost that game 3-2.

The card set?  It was assigned E120 in the American Card Catalog.  According to the Standard Catalog of Baseball Cards:


One of the most popular sets of the 1920s candy cards, the 1922 E120s were produced by the American Caramel Co. and distributed with sticks of caramel candy.  The unnumbered cards measure 2" x 3-1/2".  Cards depicting players from the American League are printed in brown ink on thin cream cardboard; National Leaguers are printed in green on blue-green stock. Backs carry team checklists.  Many of the E120 photos were used in other sets of the era.  A pair of 11-1/2" x 10-1/2" albums, holding 120 each and stamped American or National League were also issued.

So, happy Valentine's Day.  Fall in love with your cards again.  You'll be glad you did.

Thanks to AJ, The Lost Collector, my Topps Type Collection is current.  He sent me a 2014 Steve Cishek of the Marlins.  I've still got some shuffling around to do.  I booted Hank Allen of the Senators out and called up Bob Locker of the Pilots for the 1970 spot.  I still don't like that I have three Royals on one page.  1982, 1984, and 1985.  That just isn't right.  I still need a Ray and a Mariner.  Now who to kick out?