Who's on first? A quick look

You've probably seen the following meme floating around facebook or some other dark corner of the internet. 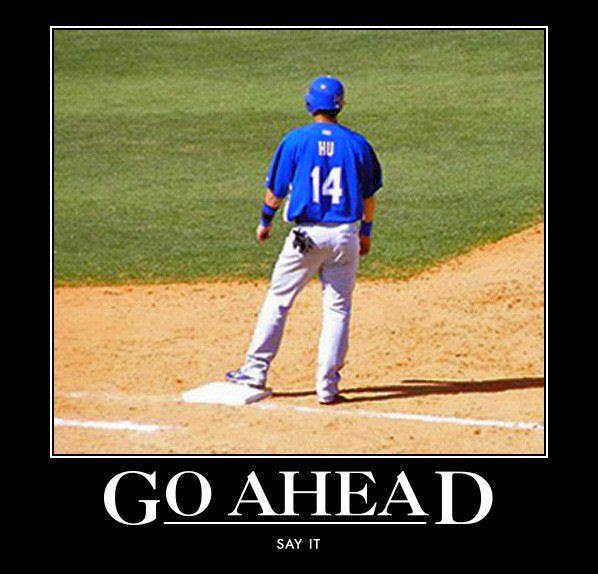 Let's take a quick look at what inspired this bit of memery.


Which spawned a sequel...


And for those that want a bit of culture...


And those that want a bit of pop culture... (warning - Walter and Jesse say a few bad words)

So here's the Listia listing for this card:

Bidding started at 100 credits.  There were two people watching the auction.  I was one of them.  The days ticked by.  I was the first bidder.  I was the only bidder.  I won. 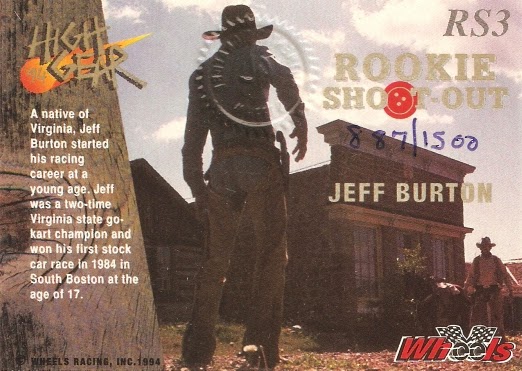 I didn't realize that it was an autographed card.  Apparently neither did the seller.  I have Jeff Burton's rookie card (a 1991 Maxx).  I have a Jeff Burton memorabilia card (2001 Press Pass Premium - Hot Treads). Trifecta complete.
Posted by Mark Aubrey at 8:43 PM No comments:

I recently completed a trade with George V., of the Old Baseball Cards club.  I sent him some Topps hockey cards that were on his want list.  In return he shared some 1971 Topps, a few football cards and a small number of Hershisers.

Let's take a look at some of them.

Ron Klimkowski had a short career with the Yankees and the A's.  This is his first US Topps card.  He was featured a few year prior in the 1967 Venezuelan Topps set.  On that card it says that Ron exhibits "una buena slider."  It also lists his date of birth as 9-3-44 where his 1971 card shows a date of 3-1-44.  What's eight days between friends? 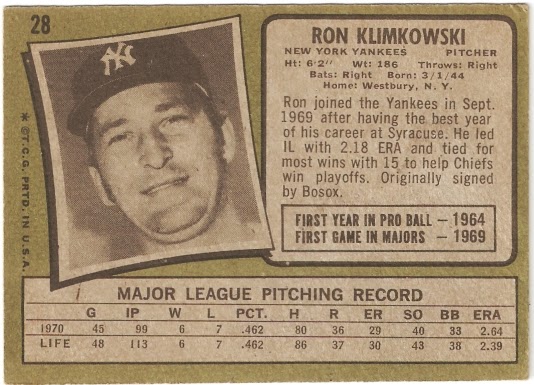 Luis Tiant's 1970 Topps card also shows him with the Twins although for the 1971 season he was pitching for the Red Sox but not well.  He went 1-7 that year.  Love the miscut on the right hand side of the card. 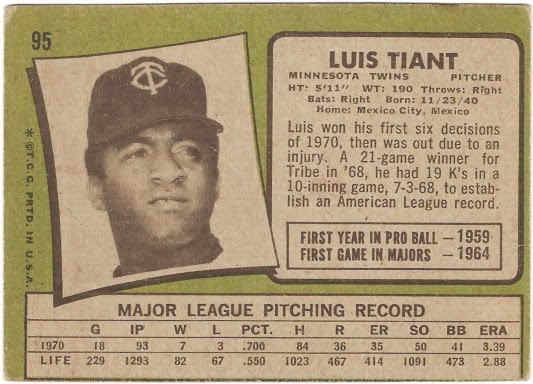 I wasn't aware that Bert Rechichar played for the University of Tennessee.  I was even aware of Bert Rechichar.  I like the "portrait you'd put on your piano" design, especially how Bert's holding his helmet. 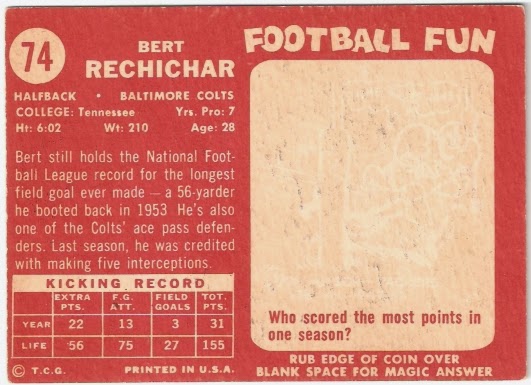 Similar statements for Harry Schuh.  Besides the buzz cut I like the non-grimacing Raider face.  Not quite happy, but not mean.  And another Tennessee tie-in with Schuh. 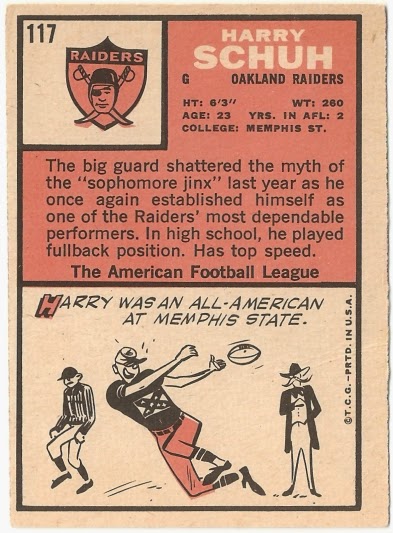 Thanks, George, for your generosity.  I'm getting closer to filling out the application for the OBC.
Posted by Mark Aubrey at 12:58 PM No comments:

I've been asked to be a guest on a radio show.  Bradley Reeves, co-founder and director of the Tennessee Archive of Moving Image and Sound, has a weekly radio show on WDVX called East Tennessee Quiver.

In an email earlier this week Bradley said:


Looking forward to the baseball show. As you can tell, it's pretty loose on the Quiver.  Bring any baseball related songs, interviews, comedy routines (Who's on first, for example) and other audio you might want to share.  There may be two or three more baseball fans in the studio with us!

I know that one of the other baseball fans in the studio will be Adam "Butter Bean" Alfrey (captain of the Knoxville Holstons, a vintage base ball club).  So I did some thinking and found a few items that I'd like to bring.  But I'm curious.  What baseball related songs, interviews, comedy routines or other audio would you bring to an hour long radio show?  I'll share my list a bit later.

A few weeks back I watched a few innings of a Johnson University game.  This last Saturday I watched a double header.  South Doyle vs. Seymour.  Junior Varsity.

The games were just five innings each.  Yes, those are the Smoky Mountains in the background.  Thanks for noticing.  A beautiful day to watch baseball.  Sunny, but not bright.  Cool, but not cold.

Lots of protective netting made it difficult to get a good action shot. 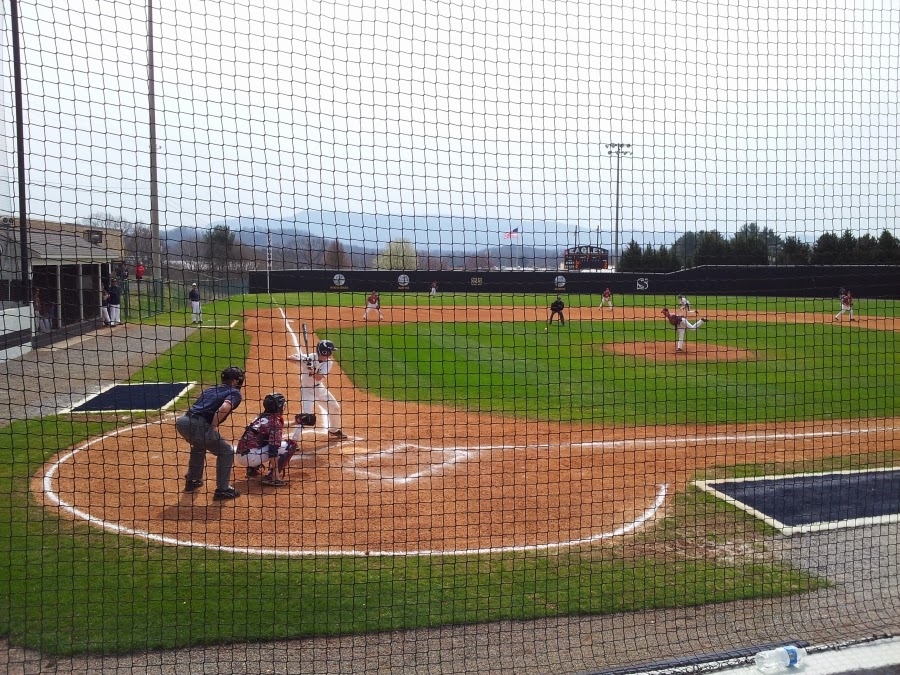 Seymour dropped the first game 2-0.  Between games I asked a Seymour player if I could get a photo of his uniform.  I don't know the young man but I do know that he's hiding a hamburger behind his back. 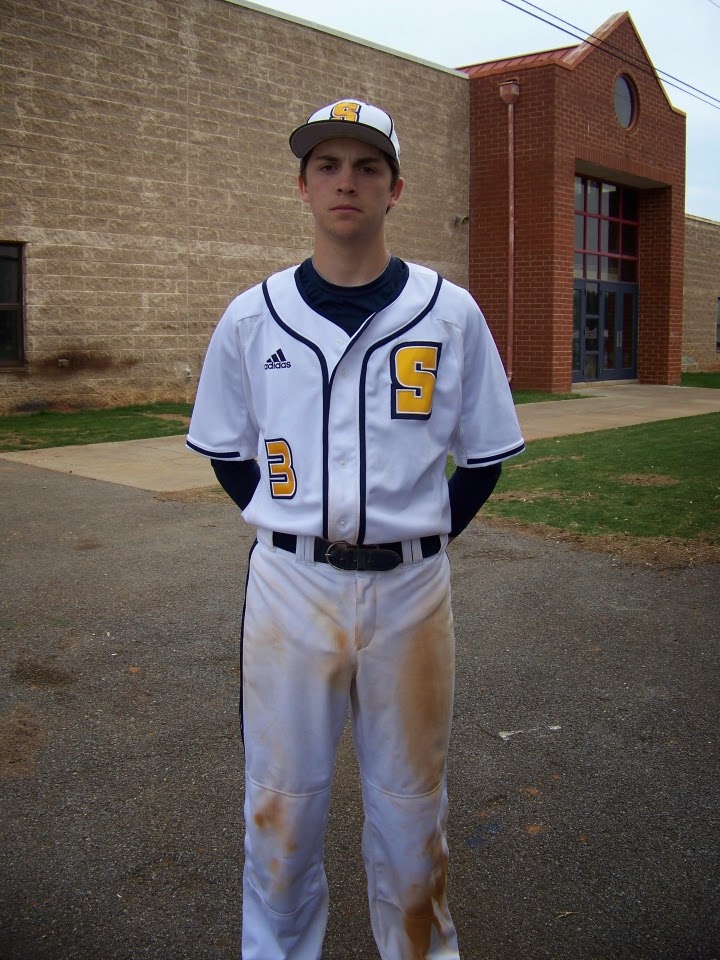 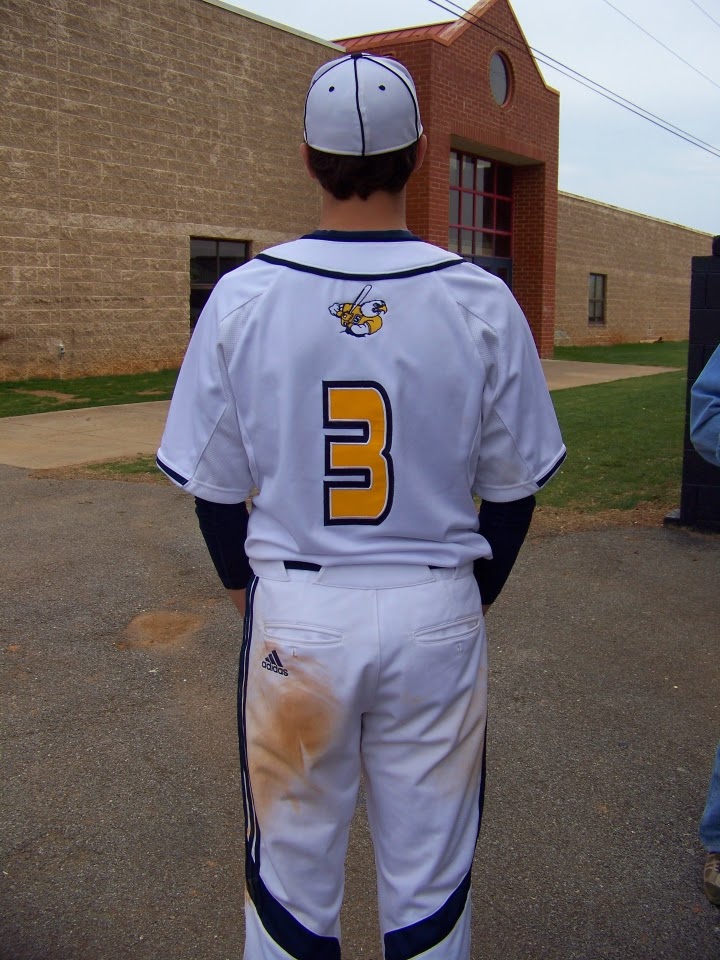 They're the Seymour Eagles.  South Doyle took the second game, 9-7.  Lots of scoring. 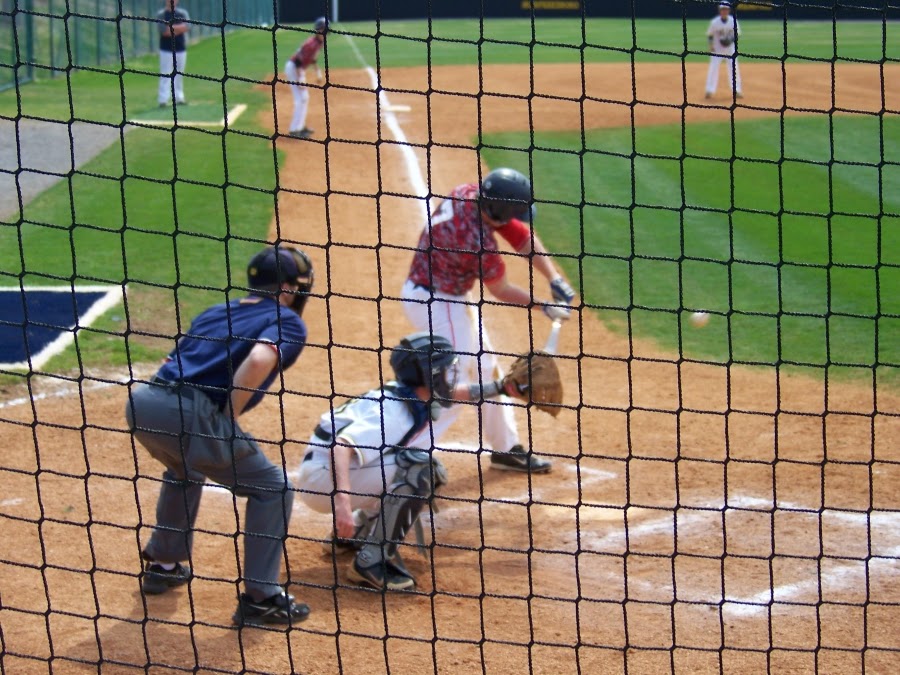 I know this player.  Brandon Handlos.  He's the son of one of my friends at church.  I wanted to support him in his efforts.  He didn't make the starting lineup but did do some field roaming and got to bat in the second game.  0-1. 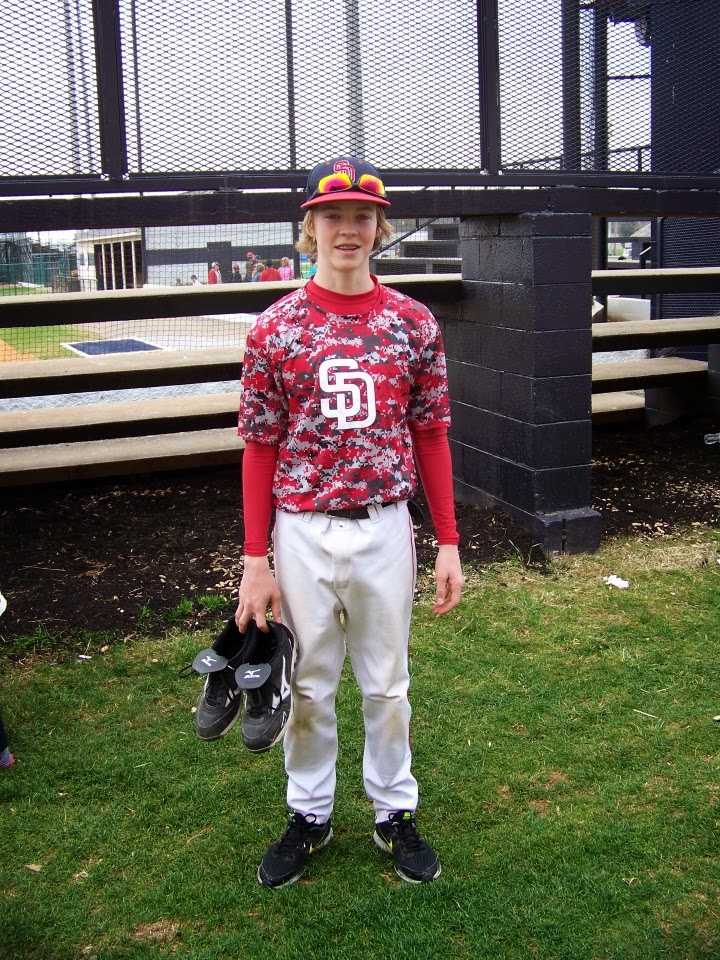 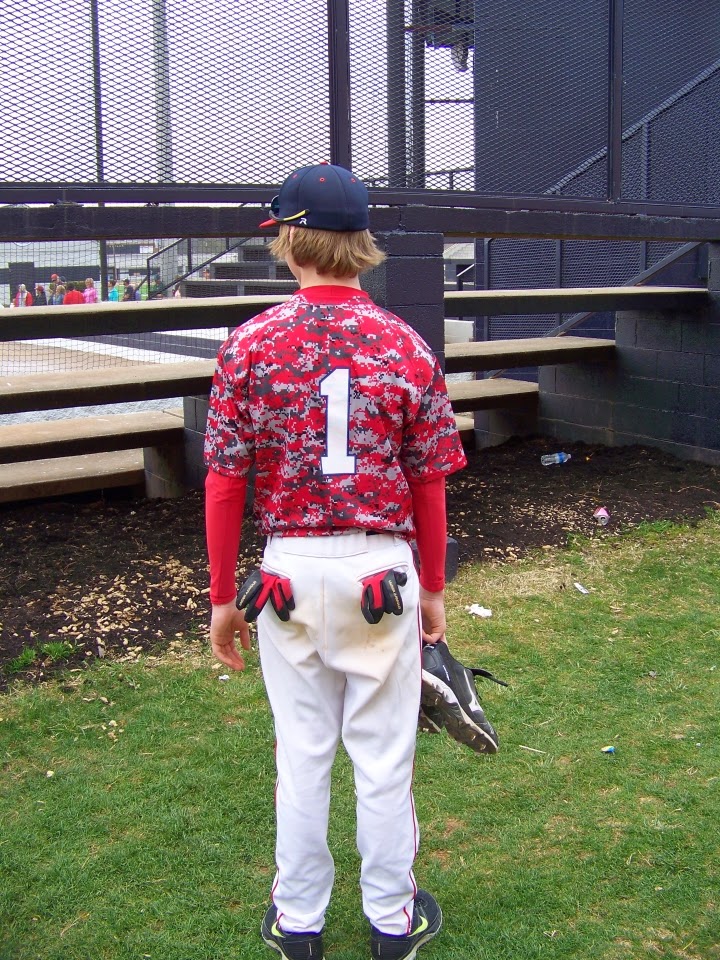 Two other families came by to watch a few innings.  It was a nice afternoon spent with friends.
Posted by Mark Aubrey at 12:47 PM No comments:

After church on Sunday I stopped by our local Pilot store to pick up Icees for Caroline and myself. The new pocket schedules for the Tennessee Smokies were out. I grabbed a small handful. I've already sent one out to a fellow blogger. If you'd like one, let me know. 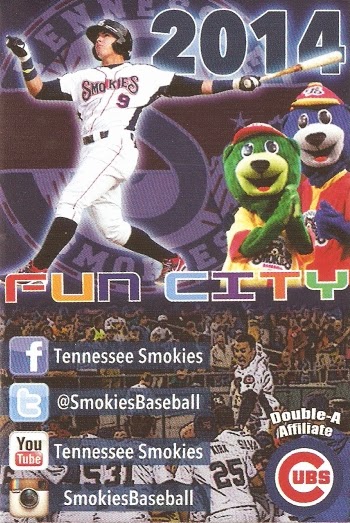 Some of the promotions this year?
There are many more, including daily promotions.  You can find them here.  Minor league baseball is just around the corner.  I can't wait.  Well, I can.  I just don't want to.
Posted by Mark Aubrey at 12:09 PM 2 comments:

That takes the cake

Another Listia pickup.  I won these cake toppers for 806 credits several weeks ago. 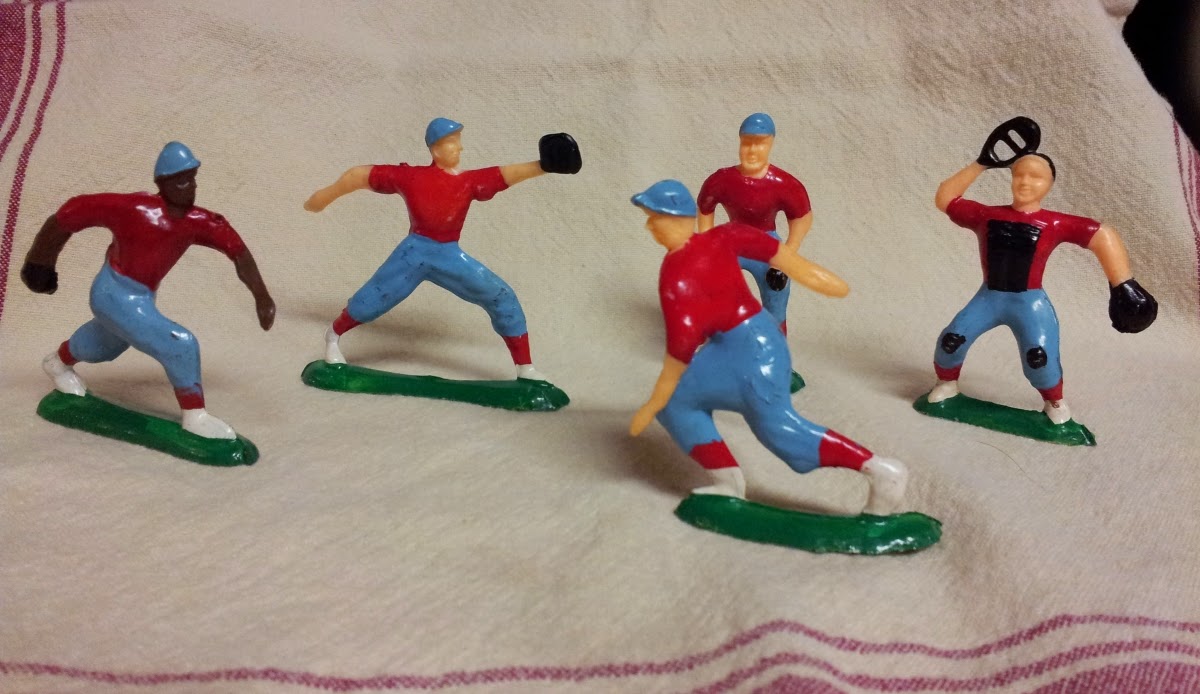 I really don't know how I'm going to display them.  Some diorama or something.  Nothing too big.  What about a virtual diorama? 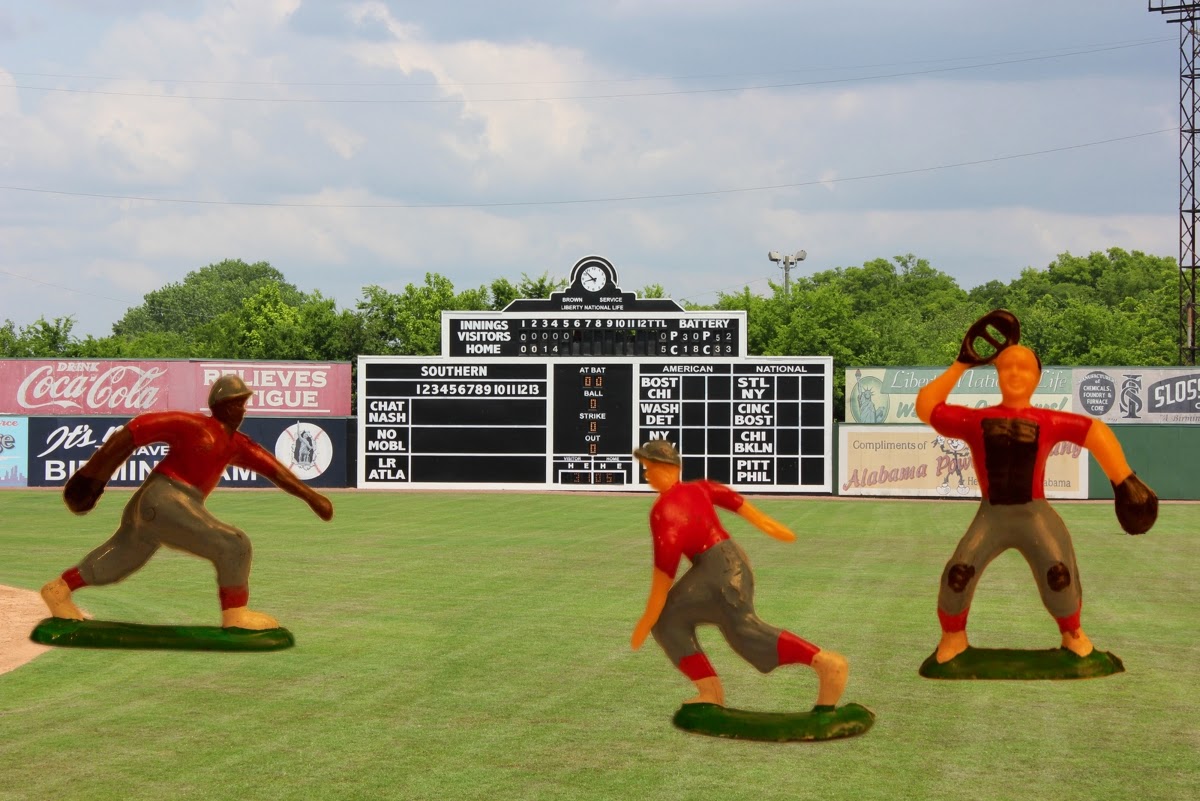 Yes, that's Rickwood Field.  I stole the image from the web. 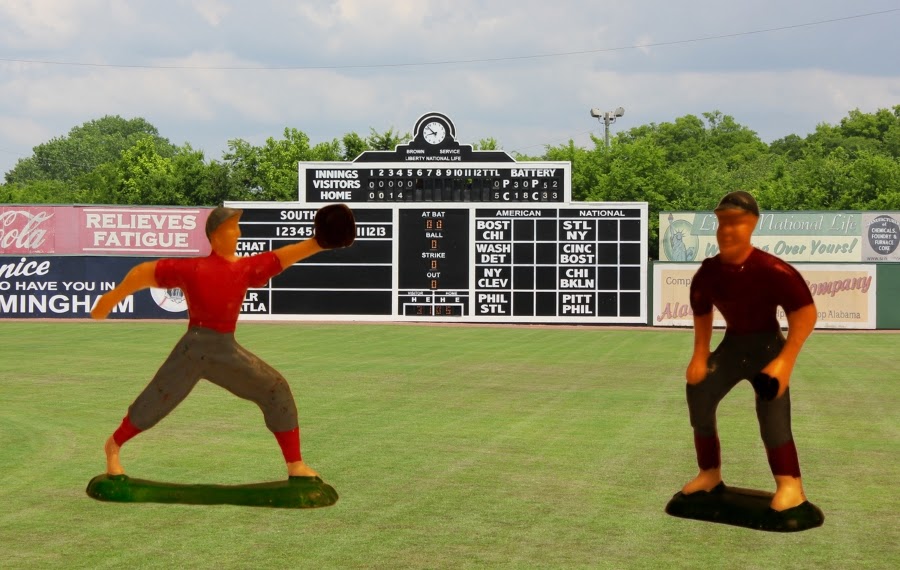 Paint dot net came out with a new version and has some features that I wanted to try.  Mind you, I'm not putting forth my proficiency at fauxtoshopping, I'm just having fun.  You might be asking yourself, "Where are the shadows?"  This diorama is set when the sun is exactly overhead.  There are no shadows.

And from what I've read about these figurine and the time that they were produced my guess is that lead-based paint was rampant.  I'm not licking the frosting from their mitts.
Posted by Mark Aubrey at 9:00 AM No comments:

Another COMC purchase.  From my favorite film, The 39 Steps. 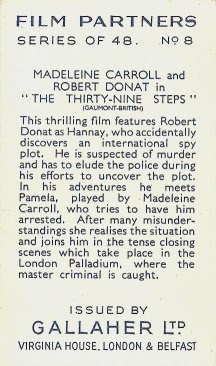 Here's a checklist for the whole series.

Since it is a movie, here are some newspaper ads from the release.  Oh, how things have changed.

These came from COMC.  I had an order going already and figured that I should add some more.

Note the dinged corner on the Fusion. 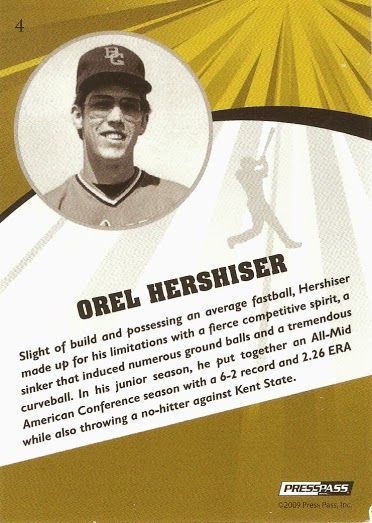 Which LA team is this?  MLB shouldn't offer an exclusive license. 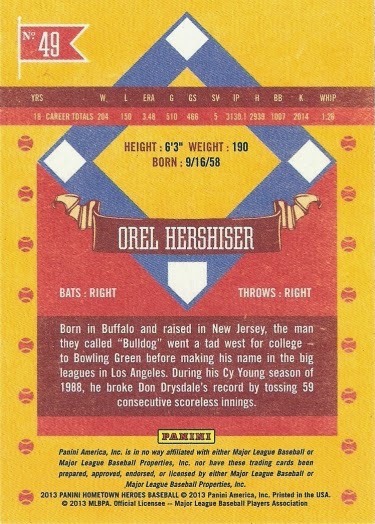 Yes, it is a Giants uniform.  Are his kids embarrassed by this shot, or are they like, "Cool, we're on a baseball card"? 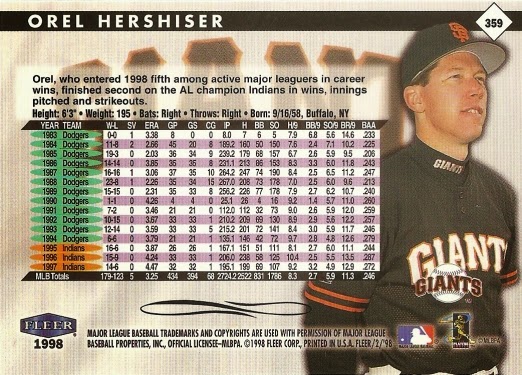 One of the many variants of Stadium Club that year.  I'll show them all together some day. 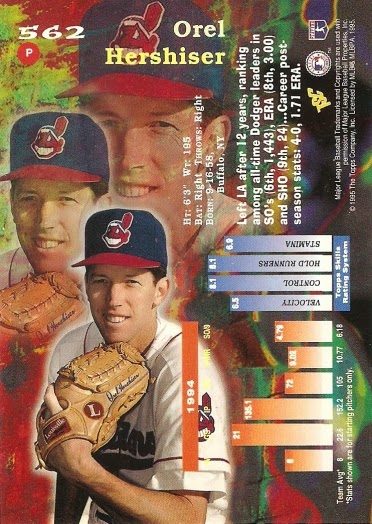 And there you go.
Posted by Mark Aubrey at 5:07 PM No comments:

Dime Box Nick showed some of these beauties a few weeks back.  The card design does a decent job combining advertising/sponsorship and honoring a team. 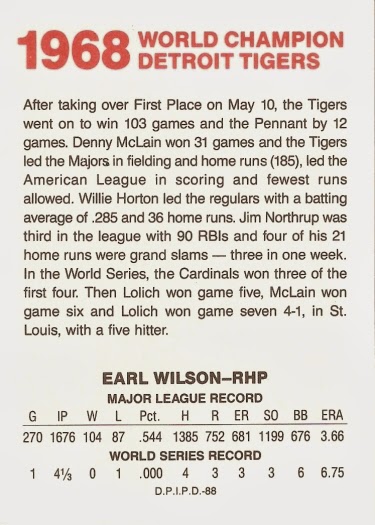 This is an unnumbered set, but the Standard Catalog of Baseball Cards organizes them by surname.  I picked this one up from COMC for more than Nick did his Tigers at his flea market.

Another card crossed off on the Earl Wilson checklist.
Posted by Mark Aubrey at 11:50 PM 2 comments:

With a nod to Steve Martin's The Jerk, I present you with The Emerald Guide to Baseball 2014.  You can download the SABR publication here. 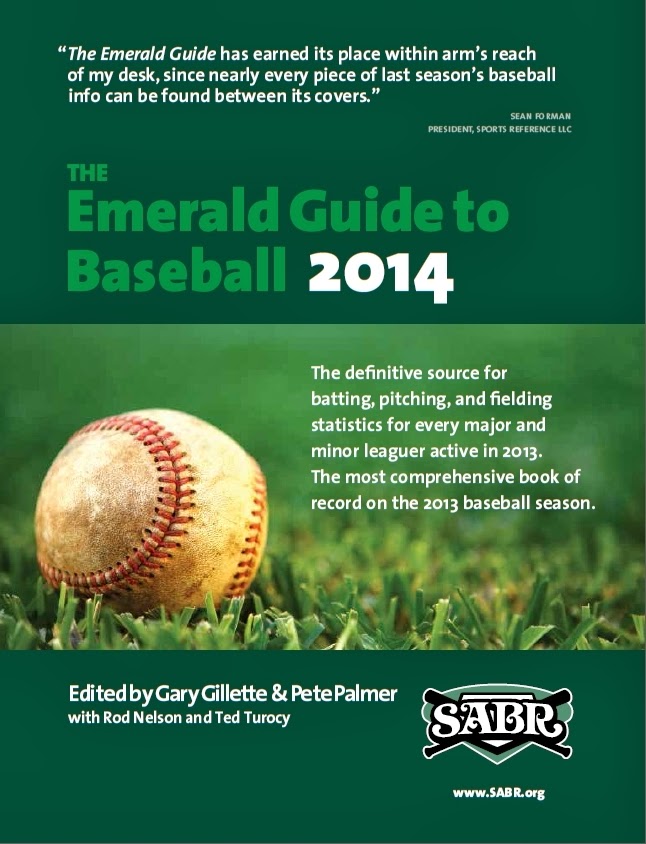 Posted by Mark Aubrey at 3:57 PM No comments:


Raz, over at The Raz Card Blog, was talking about spacing out his NASCAR-themed posts over the next month so as not to chase away both of his readers.  In support of Raz, I'm going to post some Jeff Burton cards.  Night Owl be darned.

I picked these up on Listia a few weeks back.  499 credits brought all four of them to my mailbox.

NASCAR drivers, unlike MLB players, can compete in multiple series.  Jeff Burton was racing in the Nationwide series and in the Sprint Cup series.  What a horrid color.  I should have used this card in a St. Patrick's Day tribute post. 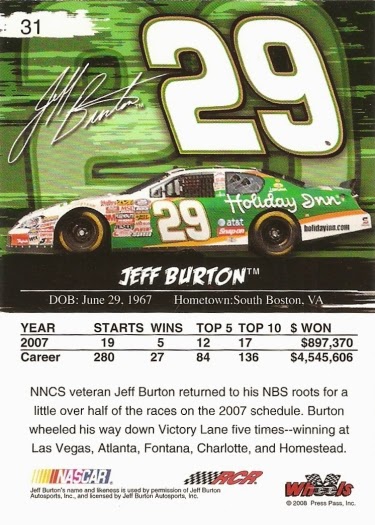 You'd think that this card would be part of an insert set, wouldn't you?  But it isn't.  Main set, just a grouping of cards with a similar theme.  Carmeleons.  Get it?  Like chameleons, they change colors.  Well, paint schemes.  Get a program.  Can't tell your drivers without a program. 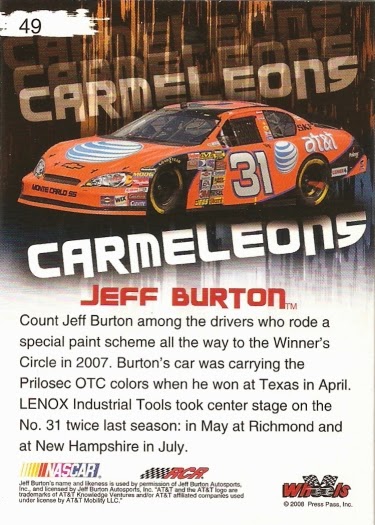 Another insert?  Nope.  They do have insert sets, just not this one.  It takes more than a driver to compete.  Jeff's pit crew hard at work.  I wonder if they ever say, "Would you like fries with that?" 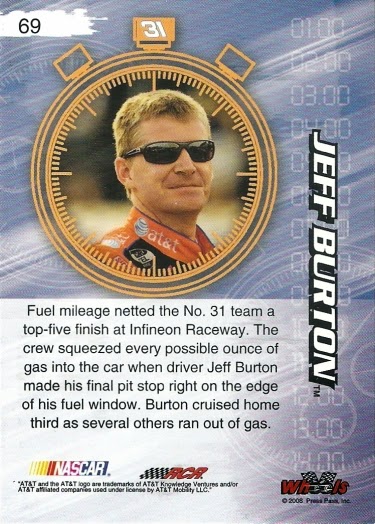 Jeff Burton, Person of the Year.  Better than the Pope, the President, some doctor helping out the less fortunate.  I almost want to track down this issue so I can read about the "Anatomy of Martinsville Hot Dog".  Almost. 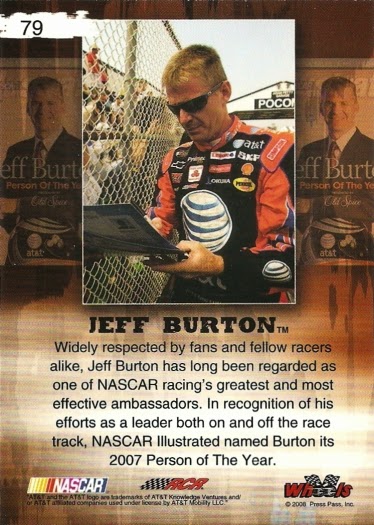 I think that I'm missing at least one of the other base cards and a few of the inserts of Jeff Burton, Person of the Year, for the 2008 Wheels High Gear set.  If I could just take the time to organize my cards.
Posted by Mark Aubrey at 3:17 PM 2 comments:

I don't quite have the baseball groove thing going this morning and I didn't want to subject Night Owl to any Jeff Burton cards.  This is what you get instead.

Quiz time.  Which one of these is not like the others? 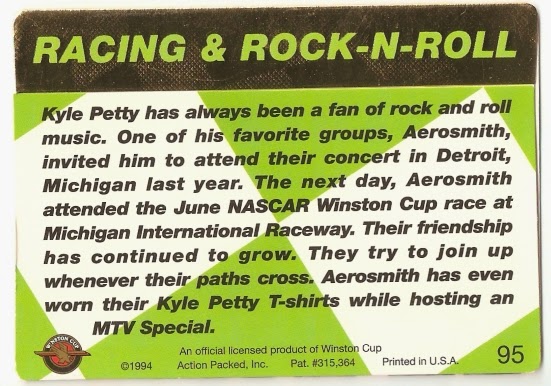 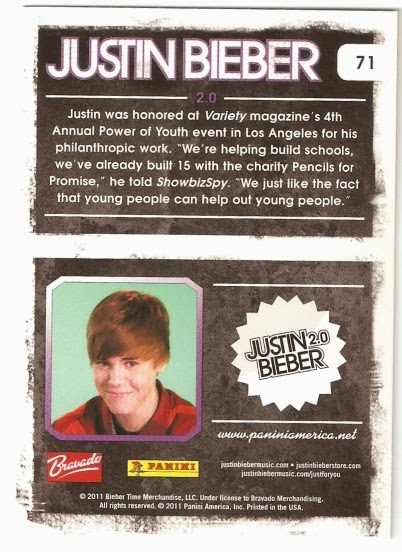 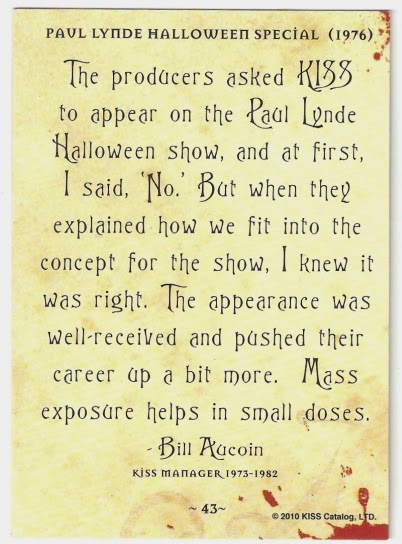