This weekend I went through my cards and pulled about 50 cards from Atlanta teams to send to Shotgun Spratling. He won the contest I ran last week.

Not being content to just send him the cards, I actually looked at them for more than just the "Atlanta" connection. I decided to scan in four of them. 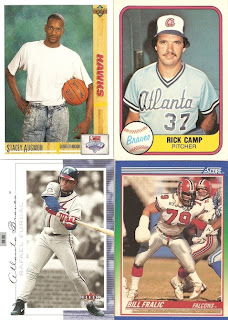 Nothing says, "I want to be in the pros" like stone washed denim. Augmon was a great college player and bounced around the NBA for 15 years, averaging 8 points per game. He may be best known for certain locker room comments.

Nothing says, "Get me a bowlful of pancita" like Rick Camp's Fleer card. Camp is known for his 1985 HR in the 18th inning against the Mets. He's also known for stealing $2 million from the Community Mental Health Center in Augusta, Georgia. He was sentenced to a federal prison in 2005, so he should be out now.

Nothing says, "I'm bad" like untucking your pants pocket. Actually, Raffy hit .295 in this, his first year in the majors. That's bad... in a good way. I respect him. And I really like the Fleer Genuine cards.

Nothing says, "Who?" like a 1990 Score Bill Fralic card. Note the club of a hand that Mr. Fralic is sporting. Research says that he was the second overall pick in the 1985 draft and that he played in four Pro Bowls. A tip of my hat to Mr. Fralic.