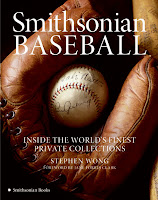 The book that I ordered a few weeks ago finally came in. Smithsonian Baseball. It is gently used (meaning that the back cover has been folded under) and the envelope that it came in was thinner than a 1981 Donruss card.

But boy, what a book. This is a joy to read, a joy to look at. Oversized and lush. Each chapter focuses on a different collection. Bats. Equipment. Folk art. Games. Cards. There are 'How To' type tips tossed in.
The writing style is flowing, never bogging down. I skipped over the chapter on gloves and equipment. I did it to get to the chapter on cards. I'll go back and read it later. I wish that more time was spent with the collectors, but that is just me. Find a copy. Buy it. I found a hardback of it today at one of the used bookstores in town. Crisp and clean. $8.50. I paid more for this one. With tax, it works out to about the same. I might pick up that copy for my dad. He'd like it.
On the shelf just above the hardback copy were two Black and White photos of Yankee players Andy Kosco and Roy White. Both photos have one player with some other folks, like a meet and greet gathering. Both are signed and have a typewritten note to accompany them. They are offering them for $12.50 each. I'm not up on either of the players, but the year would have had to have been 1968. That was Kosco's only year with the Yankees. White was with them for all 15 of his seasons. The photos are about 8"x10", framed.

Last week I finished up reading Charles Euchner, Jr.'s book, The Last Nine Innings. I thought that George Will's Men At Work took you inside baseball. Not like this one does. The things I learned. I can't recite them off the top of my head, but he goes into detail about the forces behind pitching a ball. The strain on the body. He lays out with restrained minutia, but in terms that a layman can follow, statistics on the probability of a win, based on the events in the game (walk, hit by pitch, groundout, etc). He writes about the emergence of Latino players into the National Game. Reading it has made me watch baseball in a whole different light. 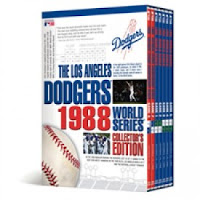 For Christmas my mom asked me what I'd like. She a practical sort. Knowing that I had a closet full of sweaters it was a safe bet I wasn't going to say, "A sweater." So I said, "You know, there's a DVD set of the 1988 World Series that would be nice." "Okay. What does it cost?" As I said, she is practical. "Well, it lists for about 70 bucks, but I think I saw it for about $18 somewhere." "Okay. Please order it for me, for you."
So, I've been watching the Dodgers take apart the Mets (NCLS) and then the A's (WS). Oh. You can get the DVDs from Supermart.com for $26.80 (as of early April, 2011). I got my set for $18.33. Merry Christmas to me. I drop this DVD in the middle of the books post because The Last Nine Innings has made me stop the DVD, rewind it and watch the pitcher face the batter again. How did he pitch to him? What was the batter thinking? What is the outfield doing? I won't look at baseball the same way.

I ordered up Pete Williams' Card Sharks from the library in the next county. While I was waiting for it to arrive, I went to my stack of baseball books that I keep telling myself I'm going to read someday. Well, I finally picked one of them up. Bob Wood's Dodger Dogs to Fenway Franks. It is a recounting of his mid-80's trip to visit all of the Major League Baseball parks in one summer. Being a school teacher he feels he has to assign them grades. He starts out in his living town (I'm pretty sure it isn't his hometown) of Seattle. He's kind of harsh on stadium. But he does a good job defending his grades.
I'm not going to be reading this through at one sitting, but it is nice for a ten minute break finding out what he thinks of my favorite stadium. Oh, wait. Parc Jarry isn't in this book. Darn.

Card Sharks just arrived. I received it on Friday and have been gobbling it up. I'm still in the early chapters, where Mr. Williams is sharing the history of baseball cards, specifically the Bowman/Topps, Topps/Fleer issues. And by issues, I don't mean products that they produced. If the prologue is indicative of the rest of the book, be prepared for some salty language. Normally I only hear that sort of language on HBO. I wasn't expecting it from Mickey Mantle. It doesn't bother me, I just didn't want Lucy to pick it up and have to ask Patricia what some of those words mean.
I look forward to finishing this and then wonder what I'll be reading next.
Posted by Mark Aubrey at 11:19 PM