Here are the prizes... 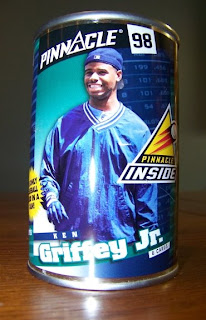 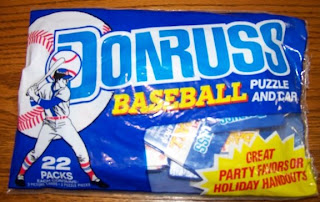 That's right.  A 1998 Can-O-Jr. from Pinnacle and a bag of 1991 Donruss cards.
The cards in a can were reviewed by capewood last year.  And Kevin reviewed the Donruss a few weeks later.
Okay, after reading the reviews, these prizes aren't that great.  I'll dig up something else to toss in.  Maybe a handful of your favorite team.  Except for Boston.  I gave the bulk of those to John across the Pond.
Rules of the contest:
Leave a comment with your answer.  Only one answer per entrant.  All entries must be posted by 11:59pm, Eastern, Wednesday evening, February 18.  (That's about 26 hours from now.  Plenty of time.)  Winner will be decided by me as the enty that is the closest to the correct answer.  In case of a tie, the earliest entry shall win.  Legal mumbo jumbo.
Gene Florence's Standard Baseball Card Price Guide (4th Edition) lists all players that had baseball cards issued between 1948 and 1991 by the following companies: Bowman, Donruss, Fleer, Score, Sportflics, Topps and Upper Deck.  This contest concerns only Topps, 1951-1991.
The question is:
How many players (with their last name starting with A, B or C)  had only one (1) card issued by Topps during that time period?  That card might have been a Topps Traded,  Major League Debut or an All-Star card.  The player might have had a card issued after 1991, but I don't care for about that for this contest.
Basically, pick a number between 1 and 1,000 and post it in the comments.
I was originally going to include all players, but the task got too large, therefore it is only players with the last names starting with A, B or C.
The winner and a list of the players will be posted after the contest has ended.
Game on.
Posted by Mark Aubrey at 10:11 PM