So it is probably a bit early in the month to do a "This and That" post. It isn't that I've lost focus or anything, I just have several things to blog about and some aren't big enough to get their own post.

First off, I received my prize for winning Condition: Poor's Superbowl Pick 'em Guess 'em contest. The real prize was the Cy Seymour card that is traveling the highways and byways from blogger to blogger. I had just turned Cy over to Sean and before entering his contest I let him know that I was not playing to win the Cy back, but to have fun and perhaps win his other prize.

I won. The prize was two of his original SlangKo produced cards that he had signed TTM. I chose Richard Petty and Walt "No Neck" Williams.

I haven't scanned these cards in yet, so I'm using Sean's scans.

--David's package was from his multi year, nay, multi decade long cleaning out his old cards. If memory serves me correctly he started this project in 2009. To me, that was the last decade. I can see the conversation at their house...

Shan: Hey, hun?
--David: Yeah?
Shan: Thanks for clearing out all those old cards.
--David: Oh, you're welcome. I've been meaning to do that for some time, but you know...
Shan: It only took you, what, a few decades to do it?
--David: Well, technically it was only a few months.
Shan: (sighs, eyes rolling into the back of her head) Time for more shoes...

To be fair, I do not know, nor have I ever met Shan. But I'm (e)friends with --David and I feel safe recreating this imaginary conversation. Who knows, maybe it was real. --David was very generous in his package and I was overwhelmed with Dodgers, Expos, Steelers, hockey cards and some Nationals, along with an oddball or two. The Zimmerman cards will be featured in an upcoming post.

Baseball Dad and I talked about trading some cards the last few weeks. Jack is an Indians super collector. Hundreds of thousands of cards. But, I was able to fill a few holes in his wantlists and sent them of on Saturday. He sent a nice package of Negro League stars from the Ted Williams card sets, a few cards from the Eight Men Out set and few other cards of players from days gone by. I'll be devoting a post to the cards I received from Jack.

Spring Training is in the air and I haven't seen any Baseball Tonight on ESPN. A bit of baseball talk on Mike and Mike but I haven't tuned into the whole Spring Training. Soon the work Fantasy Baseball league will be starting, but not yet.

I'm still in the process of organizing my cards. I've got the 9-pocket sheets, checklists, and the scanner and some time on Saturday evening. We'll see what I can get accomplished.

And finally, a big Thank You to all who read my post yesterday about Spreading the Word. I was deeply moved by the comments and willingness of my readers. And when I say deeply moved I mean that tears came to my eyes. Yes, I'm man enough to cry AND man enough to Bip. Thank you, again.

Oh, and filed under the "Ask and you shall receive" department, upon reading my post about Decomposing Composers dayf asked for a Rossini card. I found one under my stack of Bartók and Cage cards. 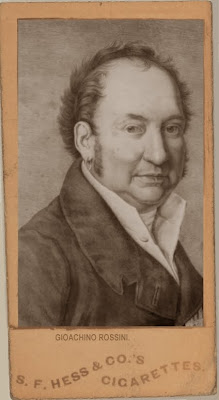