It is a beautiful campus. I've visited their library only once, and that was during a reunion a few years back.
Today I virtually visited them. I sent an email off to the Archives and Special Collections, P. H. Welshimer Memorial Library asking if they had any info on the three professional players that attended Milligan.
In very short order I received scans of yearbook pages with photos (and more) of the men in question.
Who, you might be asking yourself, are these men? Have I heard of them?
We'll start with the second question first. Perhaps one of them. Probably not the other two.
And the answer to the first question is:
Dale Alexander played for the Detroit Tigers from 1929-1932 and the for the Boston Red Sox from 1932-1933. In 1929 he led the AL in hits (215) and Games Played (155). In 1932 he led the AL in Batting Average (.367) and finished his career with a .331 lifetime BA. He played first base, occasionally stepping into left field. 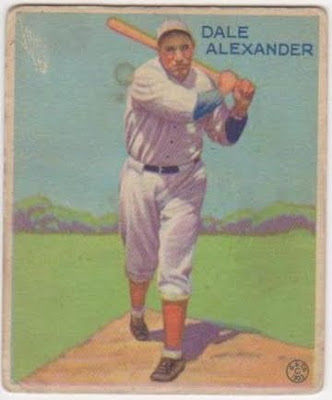 1933 Goudey, Dale Alexander (card #221)
Joe Price played with the 1928 New York Giants. One game. He played center field and had one at bat. He struck out. The Giants beat the Phillies, 14-3.
Horace "Doc" Ozmer played with the 1923 Philadelphia Athletics. He, too, played in one game. He pitched for two innings, giving up one earned run. He did record a strike out. The Athletics lost to the St. Louis Browns, 14-3.
I've asked permission to reuse the images that the MC archivist graciously sent over, so you'll have to wait until I get those to see more of Dale, Joe, and Horace.