Last month I won this Carlton Fisk card in a sportlots.com auction. $1.75 for the card, probably a few bucks for the shipping. 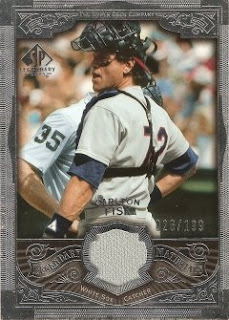 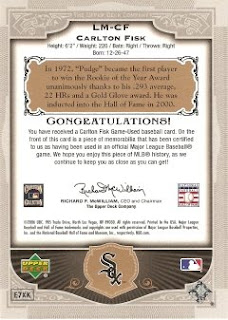 The scan doesn't accurately reflect the shiny silver foil used on the card (no pun intended).

According to baseball-reference.com, there have been four players with the nickname of Pudge.
One of these is not like the others. Can you name him?
No, it isn't "Pudge". It is "Pudge". Fred "Pudge" Haney. Fred Haney played in the 1920s, primarily for Detroit, although he saw the big cities of Boston, Chicago (north side of town) and St. Louis. What makes this "Pudge" different that the other "Pudges"? He didn't play catcher. This "Pudge" was an infielder, mostly hanging out at thirdbase.
The subject of this post, though, is Carlton "Pudge" Fisk. His Major League career was played over four decades (1969-1993) for two teams (the Red Sox and the White Sox), mostly as a catcher, but like Fred, Carlton saw some time at thirdbase (just four games). He also roamed the outfield and even played some games at firstbase.

Carlton was selected as Rookie of the Year in 1972. He was an 11-time All-Star, won a Gold Glove and three Silver Slugger awards.

His batting average of .269 alone doesn't put him into Cooperstown. Maybe it is that he held the record for most games played behind the plate (2,226) until earlier this year. Thanks, Ivan "Pudge" Rodriguez for breaking that one. Maybe it was his 351 Home Runs. Most by a catcher until Mike Piazza broke it.
He'll be most remembered for waving the ball "fair" in game six of the 1975 World Series. That kept the Red Sox alive, but they fell to the Reds the next day.

I'll remember him for his time with the Red Sox, his longevity in the game and his ingenuity.

"Hmmm..I forgot my brass knuckles. And the roll of nickels is stuck in my pocket. Hey, I'll use this baseball." 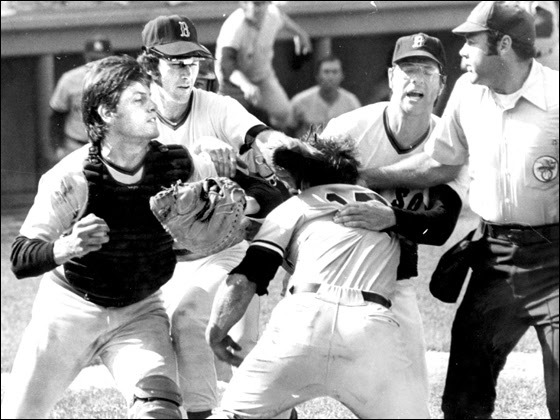