I picked this card up on ebay for $4.76. Shipping was another dollar or so. I blew my guideline budget on this card, trying to keep them under $5. But, I did pick up two other cards from the same seller, so it brought the per price card down to just over $4 per card. 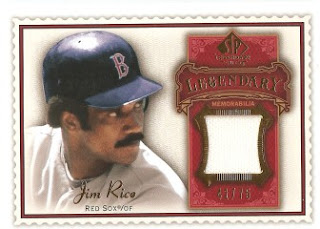 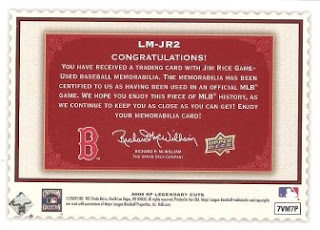 I think that the price on this was higher than I was expecting because Mr. Rice just became a member of the Hall of Fame. I bought the card in the week leading up to the induction ceremonies.

Jim Rice was an eight-time All-Star and was the American League MVP in 1978. He won two Silver Slugger awards, in 1983 and 1984. He finished his 16 season career with a .298 Batting Average and only committed 66 errors over that same period. It must be pointed out that he spent some of those 16 seasons as a Designated Hitter and the error count would be considerably lower than that of a full-time position player.

He spent his entire career with the Red Sox, including the four years that he was in the minors, where he batted .307.

In the 1970's Boston was the team I rooted for. I was born and raised in the North Country of New York. My folks attended college in the Boston area. I was never a fan of the New York teams. I do remember having (and wearing) some Red Sox pajamas in the early '70s. Now I have some Nationals pajamas to wear, but my wife wants me to to burn them. Secretly, I do, too.

I'm glad I have this card to remember the days of innocent childhood.
Posted by Mark Aubrey at 12:47 PM