Here's a card I picked up on ebay about a month ago. 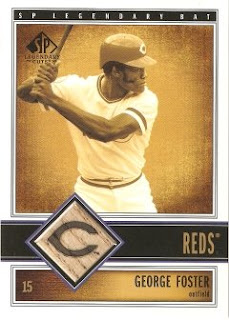 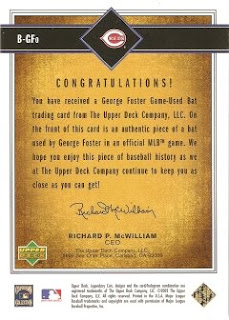 I was duped. The title of the auction was:

The card looked good. Nice sideburns, nice muscle tone. I bid on it and won. The price was right ($0.50) with reasonable shipping($2.99).

Wait. George Foster isn't in the Hall of Fame. Part of the Big Red Machine. League MVP in 1977. Silver Slugger. Five-time All-Star. Led the league in RBIs three years in a row. Won two World Series rings with the Reds.

It could be argued that he would fit in well with the other residents of Cooperstown, but he isn't there.

I contacted the seller to let them know that the auction title was incorrect, but that it was also my fault for not knowing who was in the Hall. He admitted that he hadn't checked, and like me, made an assumption.

Since it doesn't quite fit in with my collecting scheme, I'm offering up as tradebait.
** UPDATE - this card has been traded.
Posted by Mark Aubrey at 12:04 PM