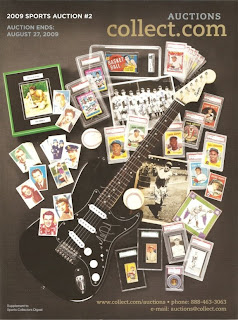 This auction ends on Thursday, August 27th. No, I didn't give you all enough time to go out and bid things up.
Quick overview: Mostly baseball items (cards, autos, balls, bats, programs, etc), some football, hockey, basketball, fleshed out with entertainment and political items. A total of 1,181 different lots.
A few things that I noticed about this auction.
I guess that times are tough all around.
Now, we get to play: What Would Mark Buy?
The rules are very simple. I peruse the catalog, pretend that I have stacks of cash and select a few items I'd like to add to my collection. Let's play.
First up is a nice Turkey Red Cabinet. Wild Bill Donovan was a pitcher who went 25-4 in 1907. And it is a cheap T3 that looks nice.
Lot #55
1910-11 T3 Turkey Red Cabinets Wild Bill Donovan PSA 1
Opening Bid: $50
Current Bid: $110

Next, we have a card in my current vein of collecting. A Hall of Famer relic card. Not just any Hall of Famer, but someone from the first class.... Babe Ruth. It is a sliver of bat, or it could be one of his toothpicks.
Lot #156
2001 Donruss Classics Babe Ruth Game-Used Bat Card "Holiday 1 of 1" BGS
Opening Bid: $50
Current Bid: $100

Following that up comes another Hall of Famer. He batted leftie and played in the center field. More clues? Inducted in 1962 by the Veterans Committee. Played in the Federal League for a few years. More? He used a 48 oz. bat. He spent most of his time playing for the Cincinnati Reds. Nope? Born in Oakland City, Gibson county, Indiana. Yes, it is Edd Roush.
Lot #257
Edd Rousch Signed Postcard PSA/DNA
Opening Bid: $25
Current Bid: $25

Moving on to the finer things, we have an original piece of artwork by Darryl Vlasak. No, I don't know who he is, but I like this. Yes, Ty Cobb is controversial. But look at it. Click the link below and look at it. And then click on the image to make it bigger. (Sorry, but right now, blogger.com is not cooperating and doesn't want to upload any pictures.) See what I mean? It is hauntingly gorgeous.
Lot #322
Ty Cobb Original Artwork by Darryl Vlasak
Opening Bid: $900
Current Bid: none

On this last piece, we're going outside of the baseball comfort zone. Hockey. That sport that is played on ice and isn't broomball or curling. A nice little display of Bobby Orr. For me growing up, it was Montreal and Boston. This one goes to Boston.
Lot #560
Bobby Orr Signed Retirement Display
Opening Bid: $100
Current Bid: $100

Thanks for playing, What Would Mark Buy?. Please visit collect.com's auction site to play your own personalized home version of this fantastic game that is sweeping the nation.
Posted by Mark Aubrey at 9:10 PM