Rather than a specific post about any one thing, I figured it is time to gather up some loose ends.

Cathartic blogging, if you will. I used to have stacks of cards around the computer. With a few padded envelopes behind the monitor. Used to. Now I've got a few stacks of cards tucked away, out of sight. And a container with other cards that I want to scan and organize. Smaller bundles of cards, sorted by team that I have good intentions of send out to other bloggers. And somewhere, a small stack of cards to send out to a blogger to help him finish off his set. But the last time I saw them was several weeks ago. I've contacted the blogger and he's understanding. If nothing else, I'll go and buy them from a card shop and send them off.
I've finished reading a few books and purchased a few more. I've already started Ron Luciano and David Fisher's Strike Two. Joe Garagiola's Baseball is a Funny Game is next. Two books for a buck and a quarter. I can live with that.
A few posts ago I wrote about a Clean Sweep auction. The two items I shared, the 1972 Red Sox Yearbook sold for $4.00. The 1991 Orioles Team signed ball sold for $38.00.
Two months ago I wrote about a collect.com auction. I said I would do an auction follow up. I didn't. Count this as it. No bids on the currency. No one bid on the panoramic picture of Wrigley. No one bid on the Great American Baseball Game game. Maybe I jinxed them.
But, I got another collect.com auction catalog today. I haven't yet looked at it. Review soon. Hopefully before the auction ends on August 27.
I've been to a few Smokies games, a (local) celebrity charity softball game, and the big high school football kickoff/jamboree. Edison's team won their match-up. His team won. He got in on one play. Not much coverage in the local paper...

Kings Academy 22, TSD 0: William Lakatosh scored on runs of 65 yards and 7 yards, and Jordan Smith scored on a 7-yard run for the Lions.

As I type, I've got the Dodgers vs. Cardinals game on TV. Albert Pujols just hit a home run off of Charlie Haeger. Albert has hit 358 home runs in his Major League career. That means that he has trotted 24.409 miles, just off of his home runs. Not quite a marathon. Slacker.
I was a co-winner with Adam to be the caretaker of the Cy Seymour card that is floating around the blogosphere. Thanks, Dan.
I like blog posts that have an image in them. I'm typing this on the laptop, so I don't have quick access to the scanner. Here's an image that I found at coverbrowser.com. It is only slightly disturbing if you really think about it. 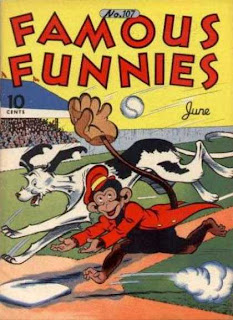