I'm thinking that some of you are saying, "Criminy, enough with the Hall of Fame relic cards. Can't you think of something fresh to post? Sheesh!"
Actually, yes I can. But I'm not going to right now. You might have noticed that this is a blog about my foray into sports card collecting. This is where I'm at. Later I'll be doing posts about Carlton Fisk, Tony Gwynn, Al Kaline, Orlando Cepeda and Rod Carew. Get used to it.

At least I'm not doing auction catalog posts or book posts. Wait, I just bought a new baseball book on Sunday. And I had an auction catalog post brewing, but then the auction ended. No it didn't. It ends on Thursday. I can still sneak it in.
But back to the Molitor card... 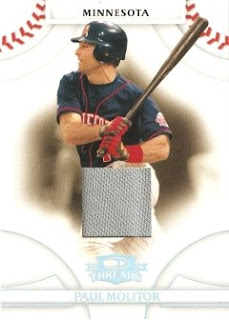 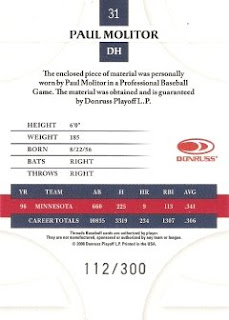 The card is nice and thick, but the print on the bottom front is printed in an shiny, almost clear, but silvery ink. Doesn't show up on the scan very well, but it is nice in person.
I was fortunate enough to receive this card from The Mojo Hand. Jay offered the card to any Brewers fan. Although I'm not a Brewers fan, I emailed him saying that it would fit in with my collecting strategy. And I pointed him to a site for die-hard Brewers fans. For some strange reason, he found me worthy to be the caretaker of the card.
Mr. Molitor was a seven time All-Star, four time Silver Slugger and he won the Hutch Award, the Babe Ruth Award, the Lou Gehrig Memorial Award and the Branch Rickey Award. And the World Series MVP in 1993 as a member of the Blue Jays. 21 seasons left him with a .306 Batting Average.
He played the infield, the outfield and spent the majority of his final eight seasons as a Designated Hitter. I could not find record that he played either catcher or pitcher.