A week and a half ago I attended a game between the Mississippi Braves and the Tennessee Smokies. Southern League AA. I organized the outing for our local DADS group. DADS is Dads Appreciating Down Syndrome. We were able to obtain a suite, had the food catered in and had a very good time. The Smokies lost, but put up a rally in the 9th. It was also Dale Murphy Appearance Night. Earlier in the day, Dale was involved in a luncheon at the park (I didn't get to go) and was on several of the sports talk shows. When asked about which pitchers he liked or didn't like to face he said that he always had a good outing against Fernando Valenzuela but didn't like to go up against Orel Hershiser.
Dale signed autographs from 8pm until 9pm. I wasn't planning on getting anything signed, figuring that the line would be too long and it wouldn't be proper for me, as host of the DADS group, to disappear for a few hours. Good thing. I talked to the Smokies' employee at the head of the line (on the concourse, just past third base) at about 8:30pm. She pointed to the line that was past the scoreboard in centerfield. There was no way I was going to get in to have him sign anything.
But I did sneak a picture. That's him behind the glass seated at the red table. Looks just like him, doesn't it? 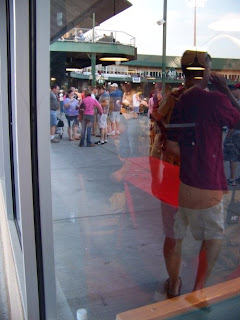 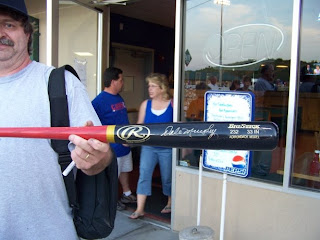 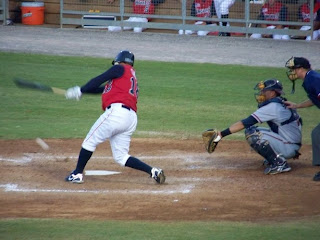 I always need to stop by the gift store to see what is new. Not so much of anything. Actually, they had just released the 2009 team card set. I picked it up. And the 2008. And 2007. While I was there I got the 2006. All years except 2009 were half off. And for organizing the outing I received a 20 % off coupon for any single purchase in the gift store. Guess what I used it on.
Patricia and Lucy, here's a Micha Owings minor league card from the 2006 set. 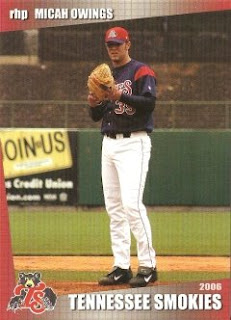 Aside from a few pitchers in stride, this is about the most action filled card there is in the 30 card set. Danny played about a third of a season with the White Sox in 2006 and then was traded with Nick Massett to the Reds for Ken Griffey Jr. and some cash. 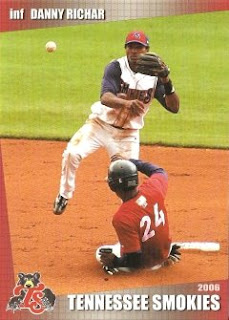 The backs of these cards are a simple black and white design. Some statistical info, but no card numbers. Here's the checklist card. 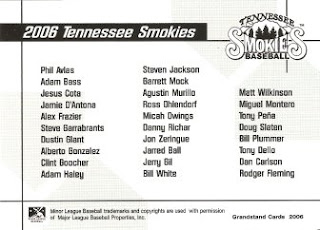