Grant, over at Old School Pack Busters, and I made a trade and I thought I'd show what I came away with. He featured this card several weeks ago on his site with the disclaimer that the jersey swatch was dirty. That was fine with me.
Actually, I didn't even have a clue what it looked like. I try to approach trades with a very open mind. I've been involved in several trades in the last 8 months or so. Some of them have been vague. "Hey, I'll send you a buncha cards, you send me what you think would be fair."
Some of them have been very specific and vague at the same time. "If you think it's worth it, I'd trade (a few jersey, an auto, some parallels and some base Uggla cards) for this card (ebay auction link) BUT only if you can get him down to $20."

This time, I didn't even bother find out what the card I was receiving looked like. I should have, but I'm not at all disappointed in what I received. 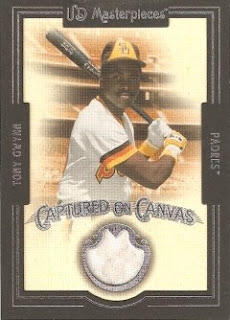 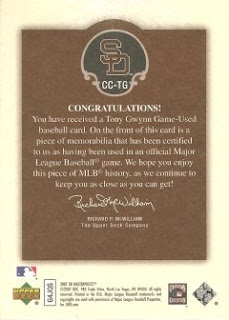 Before we sent anything, Grant and I worked out what we were going to send. One card for one card. I sent Grant a 2008 Allen & Ginter Felix Hernandez Jersey. I tossed in some older Mariners cards. He tossed in a sweet and shiny 2009 Topps Cereal Box insert, Roberto Clemente, GR-9.
If you look close at the jersey swatch, it has several splotches. Stains. I don't know what they are. Could be chew? Could be blood? It isn't a grass stain, nor a infield dirt stain. I'm not licking it to find out.
Another card on my way to collecting relic / autographs cards of Hall of Famers. Thanks, Grant.
Posted by Mark Aubrey at 11:35 PM