In the fall of 1980 I enrolled at Northern Arizona University.  Located in beautiful Flagstaff.  Home of the J. Lawrence Walkup Skydome and the Lumberjacks.  I stayed there for two years, attending classes and growing up.  College and I didn't play nice.  I wasn't motivated and squandered away a fine opportunity to complete my education.

What would have happened?  Don't know and don't really care.  I'm very happy and content with my life the way it is.  Enough about me.  Back to my alma mater.

The NAU Lumberjacks aren't powerhouses in any sport.  Only one Major League Baseball player has come from the Flagstaff institution, then called the Northern Arizona Normal School.  George Grantham.  I hadn't heard of him, either.  They've produced a number of professional football players, although none are household names and none are currently in the NFL.  Dan McClintock is the only hoopster to be drafted into the NBA.

But this year there is one player who has a chance at getting some national recognition. 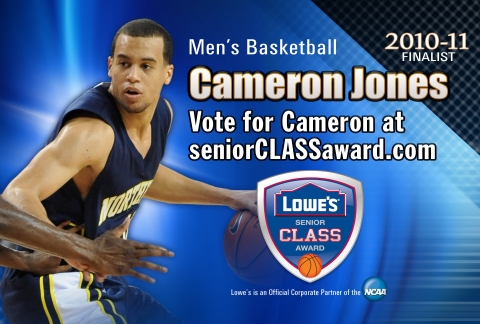 Guard Cameron Jones is a finalist for the Lowe's Senior Class Award. This honor exemplifies community, classroom, character and competition.
If you'd like to vote for Cameron Jones, please visit SeniorCLASSaward.com.