Yes, it is true. And a bit of headline journalism that I don't like. Neither Mario nor his site are being sued by Topps, but the site is named in the suit. But it got you to read this, didn't it? 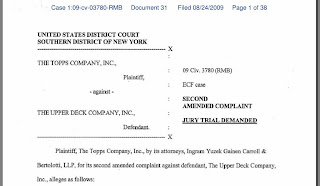 Okay, how does Mario fit into all of this? On pages 15 and 16 of the Topps complaint...

55. According to one baseball card-related blog site, at
http://completist.wordpress.com/2009/02/18/upper-deck-series-two-preview/, Upper Deck intended to release baseball cards in May 2009 that copy the Topps 1977 Baseball card design. A copy of that web page is annexed as Exhibit M.

I have contacted Mario to see if he has any reaction. He hasn't yet responded, but it has only been about 48 minutes ago. Should he respond, I'll be glad to post it here.
UPDATE: Mario responded to my email...

Ha ha, no comment but looking forward to your story! :)

Again, neither Mario nor Wax Heaven are being sued by Topps. They are using his blog entries to support their position.
In Upper Deck's response, the overriding theme that I saw is that Upper Deck doesn't know much.
They state on page 2:

3. Upper Deck lacks knowledge or information sufficient to form a belief as to the truth or falsity of the allegations in Paragraph 3 of the Second Amended Complain and therefore denies them.

These words are used over and over. Same song, different paragraph.
Here are Topps Amended Complaint and Upper Deck's Response.
I have no legal expertise and so as not to muddy the waters of the judicial system, have declined to comment further on this suit at this time.
You're welcome.
Posted by Mark Aubrey at 9:30 PM