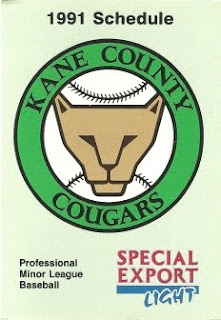 My beautiful wife and I had been married for about a year and a half. So, like young newlyweds, we'd head out to the ballpark with some friends of ours. We lived in DuPage County. Kane County was just to the west. A pleasant drive.
I don't remember much about the games, although a few players from that season went on to make it to the Majors. They went 68-67 that first season.

The next season they went 61-76, but they did have a penny smashing machine. I'm a sucker for those things. Actually, they are a nice souvenir. Cheap. Small. And you feel like a real man when you crank that handle around and out pops a coin thinner than Twiggy*.

In case your eyes are failing you, here's what it looks like under the magnifying glass... 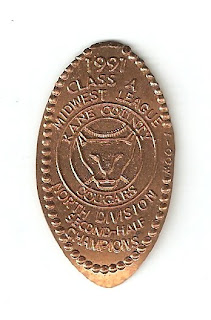 The Cougars are now a part of the Oakland A's organization and have had over 8,000,000 fans attend games.
My wife and I are still together. We're a few months shy of celebrating 20 years of marriage. I think I'm luckier.
* Okay, that didn't really make sense because all coins are thinner than Twiggy. Except those stone coins from Yap. But you can't carry those around easily.
Posted by Mark Aubrey at 12:30 AM