Orel with a Dot

Here's a card that the Night Owl sent my way.  Thanks, Greg.

I think that when he showed it on his blog, for whatever reason, I said, "Gimme, gimme, gimme" or something to that effect.  Why?  Well, I collect Hershiser. I know that Greg does, but only if Orel's sporting a Dodger uniform.   It was safe for me to do that.   I don't care what uniform he's wearing.

I scanned it in this morning and didn't even look to see if I already had the card.  According to Zistle, I do. Hmmm.  I need to check that out. 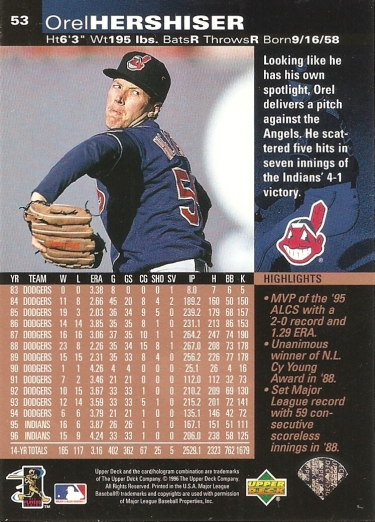 This isn't quite the UD Documentary card, but it is close. They kindly let us know from which game this photo was taken. May 12, 1996. Orel did a respectable job in helping the Indians win.

I was listening to NPR the other day and they featured an interview with artist John Baldessari.  One of the things that he does is put dots on the faces of people in photographs, hoping to have the viewer focus on other things that are happening in the photo.  I thought that I'd try it here. 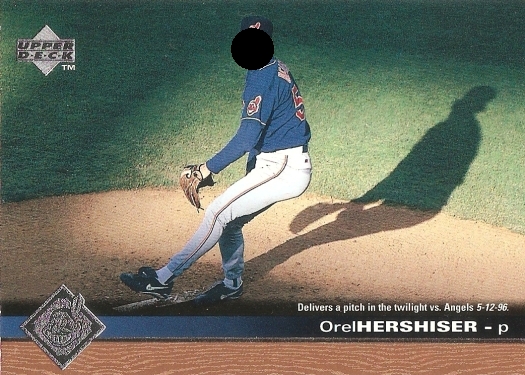 With Orel's face covered, what on this card pops out at you?
Posted by Mark Aubrey at 1:29 PM