Adam, from the thoughtful Thoughts and Sox blog, sent me a single card a few weeks back. I opened it and set it aside in a special place so I wouldn't lose it. Then I forgot where that special place was.

He sent a 1990 Upper Deck Orel Hershiser card that was signed.  He said that he received it in a trade and didn't know if it was a legit autograph, but that he wanted me to have it. 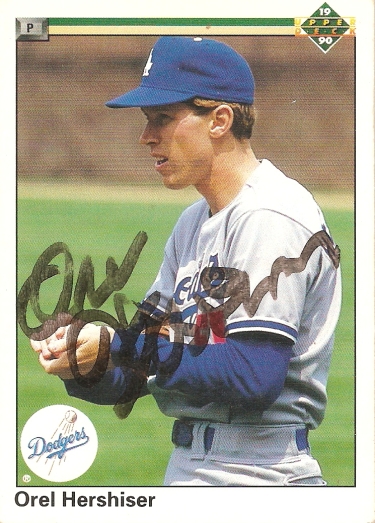 It didn't look right to me.  I only have one signed Orel card and I was too lazy to find it.  So, off to ebay.  Now, I know that everything on ebay isn't a sure thing, but I trust the following two cards to actually have been signed by Orel.

First there is the 2012 Panini National Treasures Signature Materials.  This is the signature that I've grown accustomed to seeing. 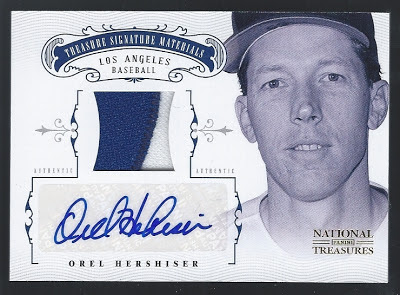 Then we have the 2009 Press Pass Fusion Cross Training dual autos of a girlish Kirk Gibson and Orel.  Again, a true signature. 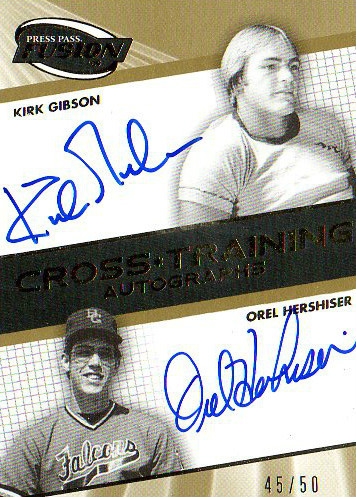 I'm not a hand writing expert, but I think that what Adam sent falls a bit short on the Sharpie scale.  There's no L in the Orel and I'm not going to try to decipher the last name.

Please know that I'm thankful to Adam for sending this my way and this post is not intended to downplay his generosity, but I'm going to say, "No Orel Auto today."  Thanks for thinking of me, Adam.
Posted by Mark Aubrey at 10:04 AM