Yes, the title of the post is correct. Jerseys card. Plural jerseys. Two of them. I won this card on ebay early this week. Since I stung myself on the Don Sutton jersey card I've been a bit more cautious. Eddie Murray went into the Hall of Fame as an Oriole. But he also played for the Dodgers, Mets, Indians and then finished his career in Baltimore. 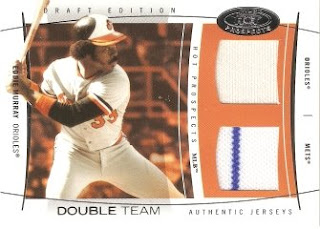 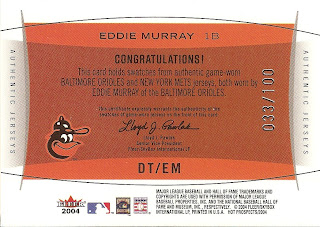 A few things that I like about this card...
The jersey swatches. A light cream colored Orioles bit and a crisp white with blue stripe for the Mets. Some collectors think that jersey cards aren't cool. And striped jersey cards really aren't cool. They're just wrong.
It is a numbered card. This one is 33 of 100. In 1983 Eddie was selected to the All-Star team, won a Gold Glove and was a Silver Slugger. He also had 33 Home Runs. Coincidence? I think not.
The text on the back of the card.

Fleer clearly states what the jerseys are. And it isn't Richard McWilliam's signature.
The delivery. This arrived via USPS, first class in a small bubble mailer. Then, to actually get to the card, here's what I had to go through. More bubble wrap. A team bag. A thick toploader. A penny sleeve. The seller (exporterjdo) did a great job with packing and shipping. I paid for it on Monday, June 15th. It arrived on Friday, June 19th.
The price. I paid $4.99 (free shipping).
I'm not quite sure why it was included in the Fleer Hot Prospects Draft set. But it was.
I was so taken by this card that I did a retro tribute card of Mr. Murray. 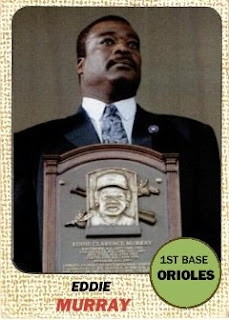 It is based on the 1968 Topps design. I snagged the photo from an old JET magazine from google books. Some GIMP and paint.net action and I was in business.
Posted by Mark Aubrey at 12:14 AM