In my quest to collect a relic (bat or uniform) or autograph card of each of the men enshrined in the Baseball Hall of Fame I have added a 2005 Upper Deck Sweet Spot Classic, Classic Materials Jim Bunning card (#CM-JB). 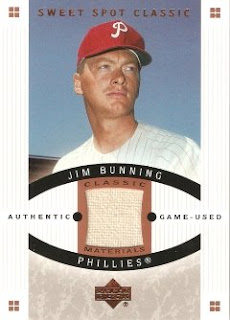 Yes, I've been taken, again. He was inducted into the Hall with a Phillies cap on the plaque. 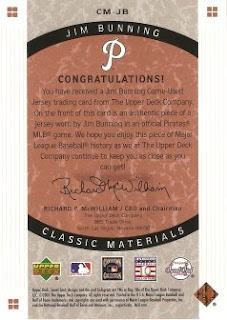 But let's read the back of the card a bit closer, shall we?

Congratulations! You have received a Jim Bunning Came-Used Jersy trading card from The Upper Deck Company. On the front of the card is an authentic piece of a jersey worn by Jim Bunning in an official Pirates® MLB® game. We hope you enjoy this piece of Major League Baseball® history as we at the Upper Deck Company continue to keep you as close as you can get!

So, he's a Phillie, but I got a Pirates jersey swatch. Not a problem, really. I thinking I'm getting over that issue. Would it be nice if it was a Phillie's jersey? Sure, but Jim Bunning was elected to the Hall for his body of work, which included starting his career in Detroit with stops in Philadelphia, Pittsburgh, Los Angels and then back to Philadelphia to finish his career.
According to the Hall of Fame he "...became the first pitcher to record 100 wins and 1,000 strikeouts in both the American and National Leagues. He also threw no-hitters in both leagues..."

Not bad for a man one normally doesn't associate with the 'big names' of Cooperstown.