The Only Game In Town

Saturday was my birthday.  Rather quiet.  Did some shopping in the morning and took a nap with Caroline in the afternoon.  The evening held a corporate Christmas open house.  Before the family left for that event we had a bit of a present opening ceremony.  Since there was no cake and candles, no singing, basically the only thing left to do was open some gifts.
I received a nice shirt, a couple of tee shirts, a set of three Louis L'Amour movies on DVD, the first season of Modern Family on DVD, and two books.  I'll feature one here and the second one will have a post on its own. 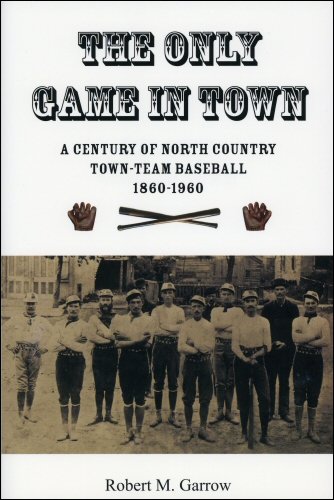 I didn't realize that this book had been published.  It was.  Last year.  I've been (slowly) blogging about the same subject since March of 2008.  I don't hold a grudge against Mr. Garrow.  I embrace him, with arms wide open.  He's taken on quite a task, chronicling the baseball life of several communities for a span of a hundred years.  My goal was just to do the same for the nineteenth century.  I'll still keep posting to that blog, however so slowly.

I have not read this book, but only skimmed it.  Garrow uses newspapers articles to convey the facts and the humor of the games and the players.  The pages that I've read show that he does it well.  Great pictures punctuate the text that is easy to read.

Here's a link to the official book page at Bloated Toe Enterprises.  If you have interest in small town ball, this one is for you.  I'm a multifaceted winner.  I like small town ball, the subject covers the area that I was raised in, and I got it as a gift.

Thanks, Mom and Dad.  For this book and so much more.

UPDATE: The local paper, The Press-Republican, has an interview and story with Mr. Garrow today, December 20, 2010.
Posted by Mark Aubrey at 10:00 PM