Greg, over at the Night Owl Cards blog shared some of the cards that he received in the mail.  One of these cards was of Eustace "Doc" Newton.


This isn't a Dodger. It's the all-time minor league, single-season wins leader. He pitched with Los Angeles of the Pacific Coast League. I don't think he wore a derby during his games. But he WAS a dentist at one time.

Which made me wonder, who was this man?  And how many games did he win?  A bit of poking around Baseball-Reference.com led me to find that he was Eustace Jame Newton, also known as "Doc". 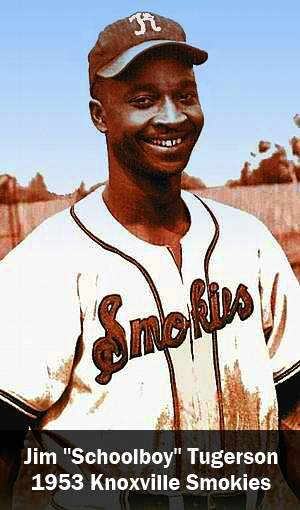 James Clarence Tugerson only won 29 games in 1953 for the Knoxville Smokies of the Class D Mountain States League.  The Smokies won 70 games and lost 55 (122 games total).

So "Schoolboy" Tugerson won 23.77% of the Smokies' regular season games or 41.42% of all their regular season wins.  He also won 4 games in the playoffs, including the championship game.

And, if you factor in the issues that Jim Tugerson was having in 1953, it is very amazing that he did as well as he did.

Yes, I understand you can't do a specific comparison between the two, but this was mostly an exercise in "what if".

So, technically, Greg is correct.  But I like Jim Tugerson more.