I did some side work on a friend's PC. Got it unfargled. To thank me, he presented me with a $25 ebay gift card. Nice friend. I would have done it for a Snickers bar and a can of Coke.

Here's one thing I bought with it... 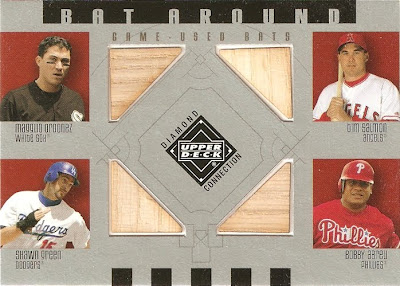 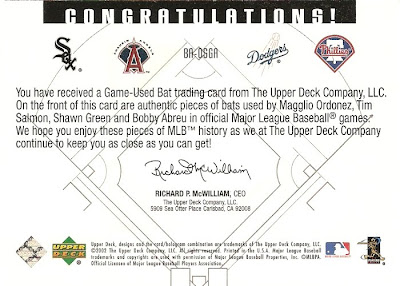 Care to guess how much it cost? Go ahead. This will be fun. Price down at the bottom of the post.

Now for the follow up. I wasn't really mad at Dan for hosting a fake contest. A good friend and I have a tradition of not pulling pranks or telling jokes on April first. People expect us to, so the joke is on them. I did it on the second. I still read his blog and have added it to my blog roll. I was suckered in by his convincing style and am man enough to say that I was taken in and hoodwinked. Thanks, Dan.

For those of you still wondering about the price of the above card... $0.85. Twenty-one cents per bat sliver. Well, add in the $3.00 S&H. I actually wasn't going after this card as a primary purchase. I was going after a Daniel Schlereth auto card. This was from the same seller and I thought I could get a bargain and combined shipping. I didn't get that auto card. I did, get another one. A better one. One for another post.
Posted by Mark Aubrey at 11:41 PM