So, I watched a little baseball tonight. And a little Baseball Tonight.
Braves-Rockies. Nice job, Ubaldo Jimenez. And what a pitching duel in the Mets-Cardinals game. 19 pitchers? Wow, that was ugly.
And now a couple of baseball / food related items. At the grocery store the other night I picked up a pack of tortillas. And there was a sticker on the package promoting a new movie. The Perfect Game. 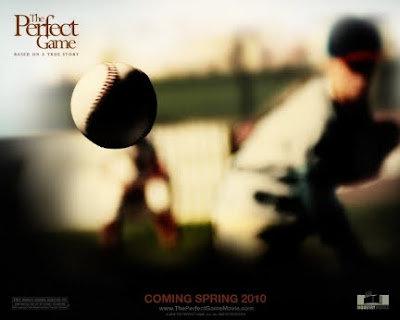 Looks like it is worth watching.
The other food item is a sweepstakes from Fritos. The chip people.
They are working with Minor League Baseball in a promotion where the winner will be a Minor League Baseball GM for a weekend. I'll be entering.
The VP of sales where I work and I share an interest in sports. We've often said that if either of us win the lottery (slim chance, since we both don't play) that we'll buy a single A team and run it. We think that it would be fun. We also talked about forming a barnstorming team with guys like Sammy Sosa, Mark McGwire, Frank Thomas, and Barry Larkin. Not the actual players, but guys with the same name. It would look good on the poster. And we'd be run out of town before any of the games got started.
I've been watching my mailbox rather closely this week. I was informed by Mr. "I've got a C stuck in my first name and I don't know how to clear it" Troll that a package was headed my way. It arrived today. Scans and post later.
I also thought that I would have received Robert Edward Auction catalog. The auction ends on May 1. I just requested a catalog this evening.
ToppsCards, on Twitter, has been giving away cards. Follow them or retweet their daily giveaway and you might win. I did. Again, scan and post later.
Daniel Schlereth update. He's gotten to see some action for the Toledo Mudhens, but could be a bit better. 6.1 Innings Pitched in 4 games. He picked up 1 Loss and a 1.42 ERA. His WHIP is 1.89. I'm still hoping that he gets called up to Detroit.
I won an auction on ebay. I've been looking at this card for a few weeks and was able to get it for less than my high bid. Again, scans and blog post after it arrives. Hint. The card is as old as my dad.
I haven't been out looking at other blogs too close. But I did get out and enjoy the weather a bit today while running errands.
So there's a bit of a wrap up. Another few days, another blog post.
Posted by Mark Aubrey at 11:13 PM