So, I've teased you and shown you some cards. Now let's look at some of the dealers that sold them to me. First off, here's where the card show was held. The Knoxville Expo Center. 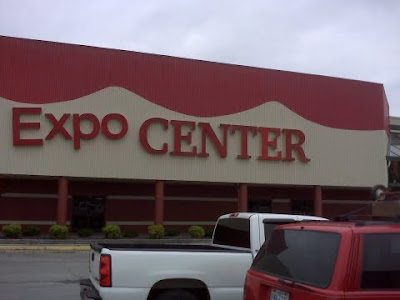 This has been the third show that I've attended there. Every February and October Inside Pitch presents a show there. Mark Dill is the dealer that I met a year ago. He used to work with a friend of mine. That friend, Kathy H., bought my house when it was on the market a few years ago. Mark lives in the area and has a nice selection of, well, everything. I emailed him before the show asking if he was attending and could he bring any 1964 Topps Giants that he had. He brought a small stack and I was able to pick up five of them that were on the Collective Troll's wantlist. I also picked up the bulk of Beardy's O's cards here. And that Topps Super. 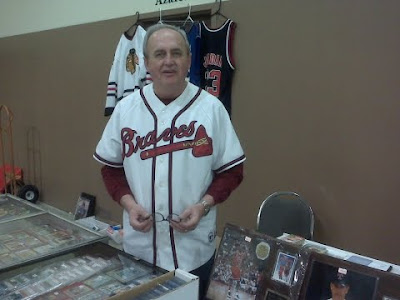 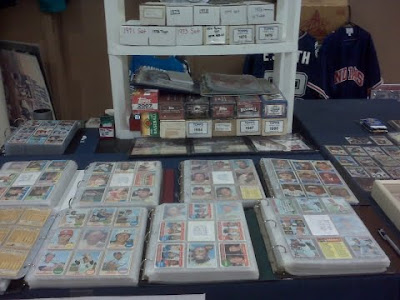 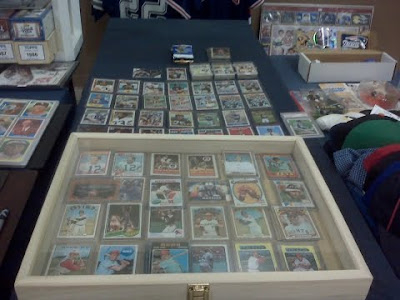 Keith Mackey runs Vintage Football Trading Cards. He's been in the business since 1982 and he specializes in vintage Football cards. This is where I got all but one of my Bill Wade cards. Keith was very helpful in helping me locate the Wade cards in his boxes. He's organized and had several of each card that I was interested in. He laid them out and let me select the one that I wanted. When asked if I could take his picture, I think he said, "Sure, maybe some cute girl will have dinner with me." At least that's what I heard. 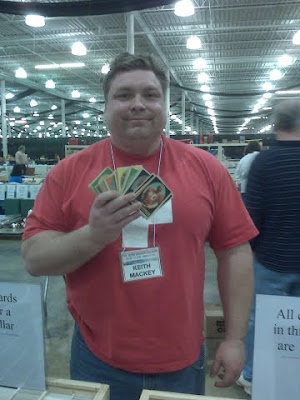 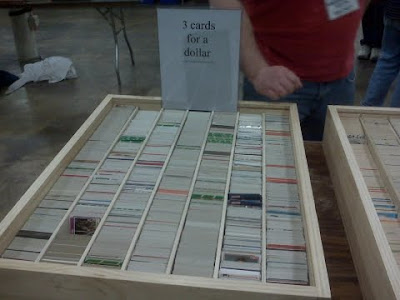 Steph Wallon is the dealer from whom I purchased the AAGPBL auto card. Yes, Mr. Wombat, he had the boxes of $2 relic and auto cards that didn't speak to me. I apologize for the blurry photo of Steph. He was a pleasure to talk with and I wish that I had a bit more money to spend on his offerings. 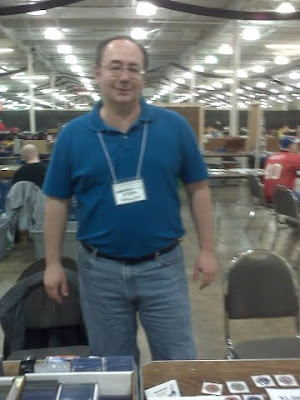 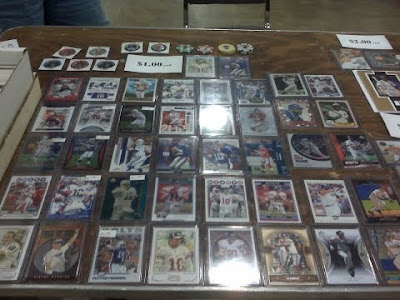 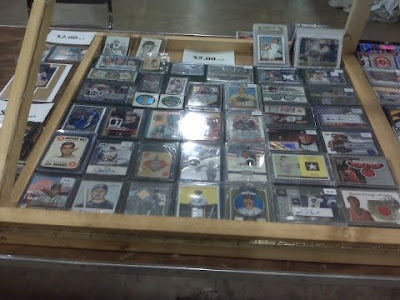 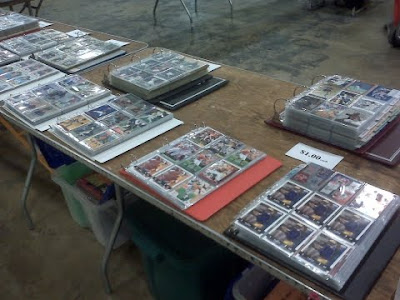 Wes Starkey runs Bully Ball Cards. Everything that I saw on his tables was clean. Everything. Clean. I picked up one of my Bill Wade cards here and one of Beardy's Orioles. Did I say that everything was clean? Very well priced for he was offering. Another joy to talk to. He has a nice selection of graded wax packs. They brought back many memories. 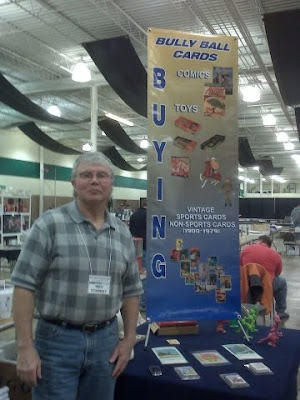 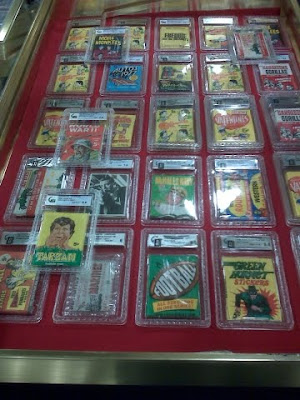 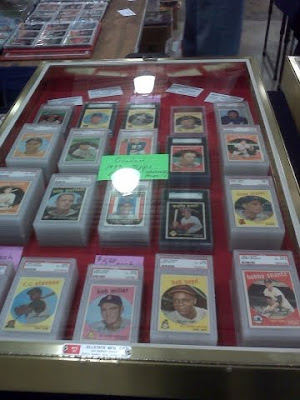 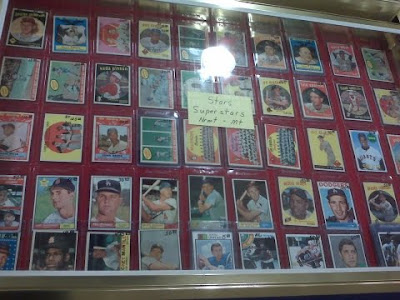 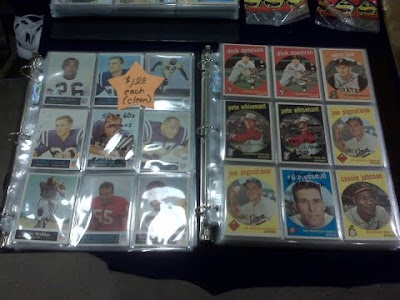 One other dealer I need to mention, but I didn't get any photos of, is Chandy Greenholdt. He's the silk guy. And the Topps Freedom's War guy. And the Motorola guy. And the Topps Look 'n See guy. He has quite a few items on ebay. When I asked him about any 1964 Topps Giants he quickly said that he didn't have any with him, but immediately told me that he has many of them, save the short prints, at home. In a box, in one of three rooms filled with boxes. He then listed all of the short prints from that set. I knew immediately that this guy knew his cards. Aside from the 50 cent boxes of oddball stuff he had a table of cards that he just bought from a collector. Old Judges, Goudeys, T207s, 1950's Bowmans and Topps. Just fantastic stuff.
There were other dealers there that had some nice things, but my time was limited as was my money. One dealer had several boxes of relic and auto cards for $3 each. Several Hall of Famer relic cards, but I wasn't in the HoF mood on Saturday. I didn't have my list with me. I wasn't fully prepared.
This was a toy/comic/card show. I got to see several old TV and movie related toys and puzzles that were fun. Lots of screen cowboy items. A few tables of NASCAR scale models. A few comic book dealers.
When I talked with many of the dealers I asked what their take on the show was. The majority of them said that the show was dead. Not much traffic and those that did stop at the tables didn't buy much. Now, this was just 3-1/2 hours into the show on Saturday. They still had another day to go. One of the dealers said that one of the malls in the area had a four day card show at the same time and that might have hurt attendance. The entry fee for an adult was $5. Inside Pitch has a dollar off coupon on their website which I took advantage of. The flea market was in the same building with no entry fee and there are usually a few tables of cards there.
Although there were several dealers that dealt in more modern cards, I just glanced over them and didn't dig too deep. I should have looked at the dealer that had supplies, but I'm okay in that area right now.
Overall, a good show for me. I had some goals that I met, helped the Collective Troll and Beardy winnow down their wantlists, and stayed well within my budget. I'm happy.
If you'd like more contact info on any of the dealers that I've profiled here, please leave a comment. And make sure there's a way that I can contact you (email on your blog). Or email me at:
mark dot aubrey at gmail dot com
Posted by Mark Aubrey at 11:43 PM