Frank Howard with the White Sox?

Another vintagey card from one of my local card shops. This was next to the Matt Batts card.  I was drawn to the crossed out team name.  A previous owner had tracked Mr. Howard when he left the Dodgers.  I wasn't familiar with his career.  I knew that he started with the Dodgers, but I didn't know that he went to the White Sox. 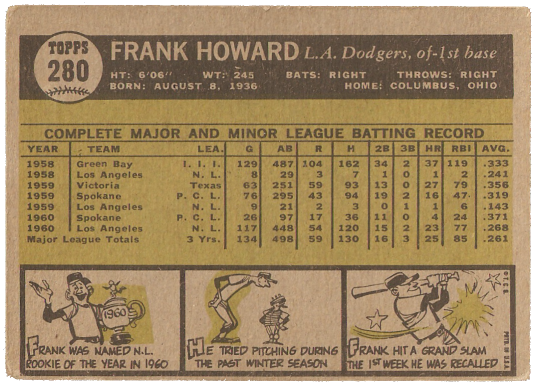 After getting home I looked Frank Howard up on baseball-reference.com.  It wasn't the White Sox, it was the Washington Senators.  Darn, the things you learn because of baseball cards.

Frank won the Rookie of the Year in 1960 and was a four time All-Star.  This is his second year card.
Posted by Mark Aubrey at 2:10 PM