We have a winner. I'm declaring that Sean, from Condition: Poor, is the winner.

My intent was to put up a simple puzzle, without instruction to see what would happen. Interesting how some users tried to solve it without even knowing what, or if, there would be a prize. It is generally implied that a contest = prize. And it was true in this case.

I'll be sending the prize, the Cy Seymour card to Sean, who will be the caretaker of it until he's ready to send it off in about a month. 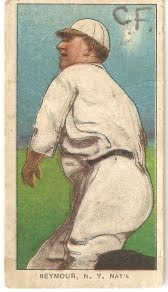 For those of you who want to know the answer and how it was solved...

The instructions were the names of the images. Yes, they were vague, but that's part of the puzzle.

"I Want Cy" is the answer I was looking for. But since it is my blog, Sean thought that I wanted Cy.

An unintended red herring came into play when Bob Welch, as a Cy Young Award winner, was thought to be the answer. Nope.

Then I made an incorrect assumption. Actually I made it a few days ago. I assumed that people knew everything about my blog. Sure, I'm the guy that collects cheap HoF relics, likes Orel Hershiser and is a pain to trade with because my want lists are so specific. But then I remembered that we all have lives and there are days that go by when I don't look at every blog entry of every card blogger. Actually, I've trimmed my reading down by quite a bit. I don't know why I assumed that the contest entrants would know that I am the current keeper of the Cy Seymour card. You all shouldn't. I'd like it if you did, but my blog isn't everyone's cup of tea.

So, bottom line... this wasn't the Ginter Code. And you didn't have to buy anything. I've declared Sean the winner and you can bug him after the New Year.

Greg, I'm sorry that I made your head hurt. Many Dodgers will soon be on their way to ease the pain.

I also do catalog reviews and one of those is due up in the next day or two.
Posted by Mark Aubrey at 4:44 PM