I'm in the Nashville area, attending a conference. I did my homework before I got here and found a sportscard shop about three miles from the hotel. It is just of I-65, on Trousdale Rd. 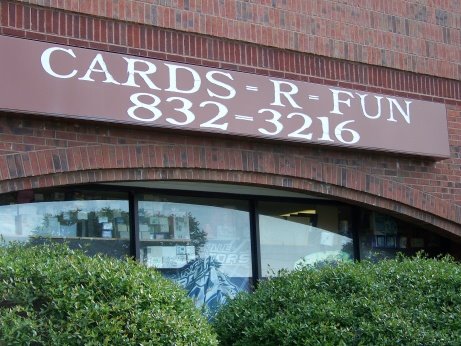 This is John Dunphy. He owns the shop. He's owned it for about 20 years. He's been at this location for about the last eleven years or so. According to him, he's the only card dealer currently in Nashville. Some have come and they have gone. Business is slow for him right now. He was glad to talk about life, to help me look for some Hershisers, to talk about the business and to show me any item I asked to see. When I walked in, U2 was blaring on a cd boombox. It was never turned down and I got to hear John sing along with Bono. You don't hear that everyday. The shop is small and crowded. He carries mostly stuff from the early 1950s to the present. Baseball. Golf. Racing. Basketball. Hockey. Football, both American and English. He also has some Magic, Pokemon and YuGiOh cards. Some books, DVDs and videocassettes. A bit of everything. 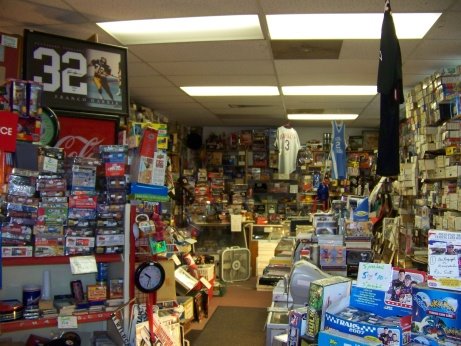 Cards. Floor to ceiling. Boxes on boxes. Eight foot ceilings. Probably 20 or more feet on the walls. Stuff you couldn't get to because it would take you ten minutes to unload all the cards on top of them. Most of it was organized, but some of it... well, not so much. 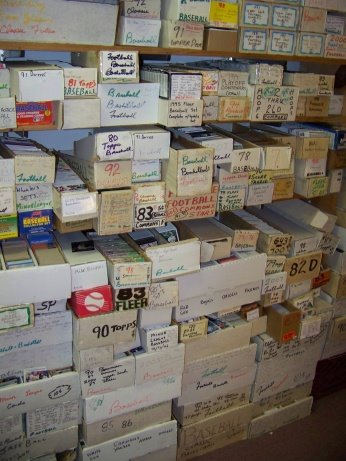 I picked up a few cards...
1990 Baseball Major League All-Stars Playing Card, Rickey Henderson (King of Clubs)
1990 Baseball Major League All-Stars Playing Card, Andre Dawson (9 of Hearts)
2001 Topps Archive, Orel Hershiser (# 268)
2007 Upper Deck Masterpieces, Yogi Berra / Jackie Robinson (# 54)
2008 Donruss Threads, Carl Erskine (# 14)
a pack of Fleer 1991 baseball cards
a pack of 1988 Score baseball cards
a pack of 1992 Donruss baseball cards (Series II)
All for a few pennies over $5. And that includes tax.
And John made a few phone calls and I'll be picking up some T206 card holders on Saturday. He's a good shop owner. I'd like to thank him for his time and his generosity of letting me snap some photos. When asked if I could blog about his shop his reply was; "Blog the h*ll out of it."
Remember, Cards-R-Fun. Now go and enjoy them.
Posted by Mark Aubrey at 10:27 PM