David, over at Indian Baseball Cards, and then some posted a few days ago about a Denton Young card that he picked up on ebay. He had some questions about the origins of the cards. I volunteered to see what I could find.
Authenticated Ink (or Auth/Ink) cards are standard sized, very thick photo cards, generally commemorating the birth year of the card subject with a penny from that year. The cards have a blank back. The cards are not numbered. Card subjects are generally sports related, but do include religious, political, and other historical figures. Other sports include golf, tennis, cricket, football, boxing and racing. 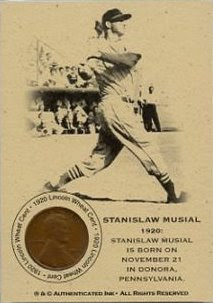 A few days ago I wrote to Don Fluckinger, editor of the Standard Catalog of Baseball Cards to see what he knows about them. They are not included in my 2008 edition. I'm still waiting for his reply.
This evening I emailed the owner of pujols-sports-emporium on ebay. He's selling about 300 of the Auth/Ink cards. I haven't heard from him, but it has only been a few hours.
I'll update this post if I find out more about these cards.
Posted by Mark Aubrey at 9:12 PM