My nod to the Super Bowl

I've been underwhelmed by the NFL this year.  But I will be attending a Super Bowl party.  I'm leaving early to get the kiddo ready for school tomorrow.  Also Downton Abbey is on.  Mostly I see the Super Bowl as a prelude to the return of The Blacklist on NBC.

My brother gave me this card.  I think it was left over from when one of his coworkers was canned.  You know, after the guy leaves, everyone goes to his desk to scavenge?  Find a better stapler.  Hopefully get back the pens that he stole from you.  If you're lucky you get a newer desk chair, maybe just the chair mat.  My brother got Mirro's only football card. 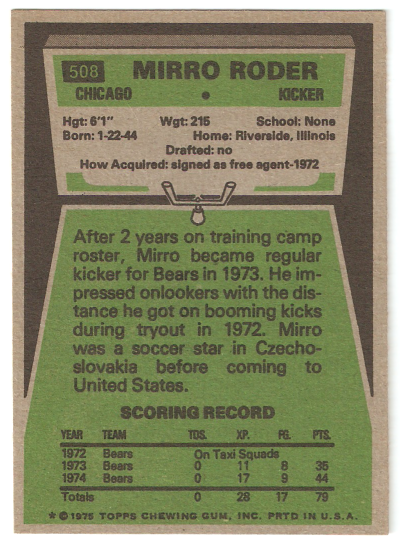 So, the back of the card looks like a pinball machine.  Apparently they don't have schools in Czechoslovakia.  And following one path of immigrants in the Windy City he drove taxis for a year.