I was at the Dollar Tree in south Knoxvegas on Sunday. I found their stash of trading cards. I selected three different packs to see what they might contain. A buck a pack? I can live with that. 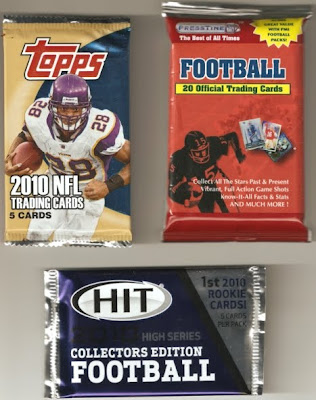 First the Topps. Hmmm. Looks amazingly like the 2010 Topps Baseball issue. Doesn't really do anything for me. Especially since they use a cropped copy of the front photo for the back. 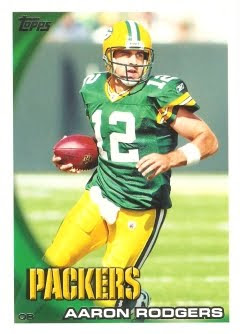 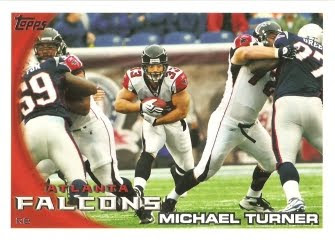 The 2010 Topps pack yielded the following:
#29 - Michael Turner
#32 - Amari Spievey
#86 - Yeremiah Bell
#150 - Aaron Rodgers
#161 - Mike Thomas
Next comes the HIT pack. They are billing themselves as "The Hobby's First Micro-Printer". Not quite sure what that means. I took a quick look at their website, but didn't read all the press releases. Maybe the meaning is buried in one of them.

I like the looks of them. Well, most of them. I'm not crazy about the Damian Williams card. It looks much darker in person. They use a lot of quotes on the backs. Psst... Pete Carroll isn't the head coach at USC anymore. Some other weasel is. 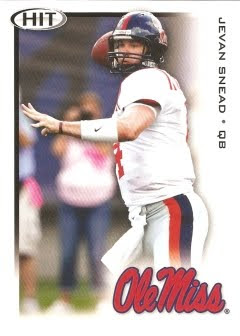 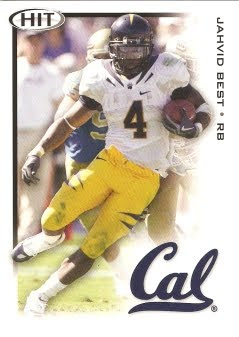 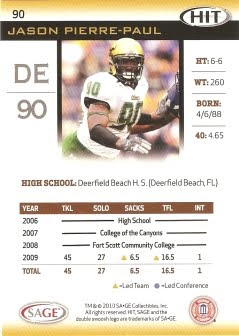 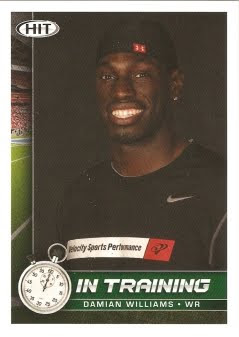 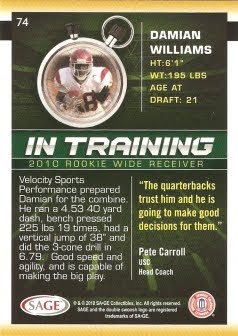 The 2010 HIT pack yielded the following:
#54 - Jevan Snead
#64 - C.J. Spiller - In Training
#74 - Damian Williams - In Training
#80 - Jahvid Best
#90 - Jason Pierre-Paul
The thing I really liked about this set is that it is manageable. There are 100 base cards in the set, essentially two series (a Low Series and a High Series). 20 Write Stuff Insert cards. 30 Prospectus Insert Cards. 6 Aspire Autograph Insert cards. 156 cards total. It could be done. Not by me, but by someone who likes their football cards.
I did note a bit of a mistake in their packaging. On the back, it states that the pack contains Low Series cards. Then it states that "Making fraudulent claims is punishable by State & Federal laws." 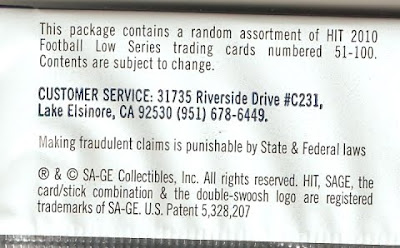 From the front of the package it clearly states that these cards are High Series. All of the cards in the package were High Series. I'll chalk this up to an editor's mistake. they probably used the existing copy and just missed it. Maybe, though, I could leverage it into something bigger. No. No I won't.

The third package is from Presstine Marketing. From their website: From Montana to Manning, Sanders to Tomlinson , you never know who you’re going to get in a PMI pack!! Because they repackage. I don't find anything wrong with this. They basically state that on the package. I wasn't looking for a hit. I was just curious to see what was inside.

I'm not going to take the time to type it all out, but suffice it to say that there were 20 cards, some from issues I've never heard of, all in very nice condition. No dinged corners, no drawn-on mustaches. A nice pack for a buck, especially if you want to give them to your nephews, or nieces, if they collect. 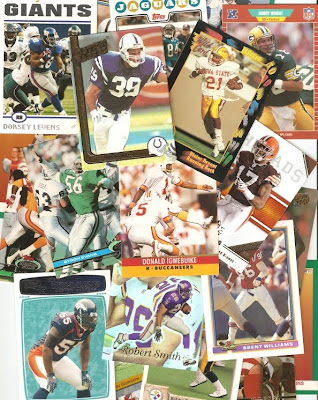 Overall, I'm ready for the weather to cool down and some good football to start up.
Posted by Mark Aubrey at 9:00 PM