A week or two ago the Core Contrarian blogged about the 2009 Goudey Dave Concepcion card. I commented that Dave Concepcion was born in Roswell, New Mexico. I had heard this story many decades ago. Project Blue Book and all that.
Using the Freedom of Information Act I was able obtain the following proof... 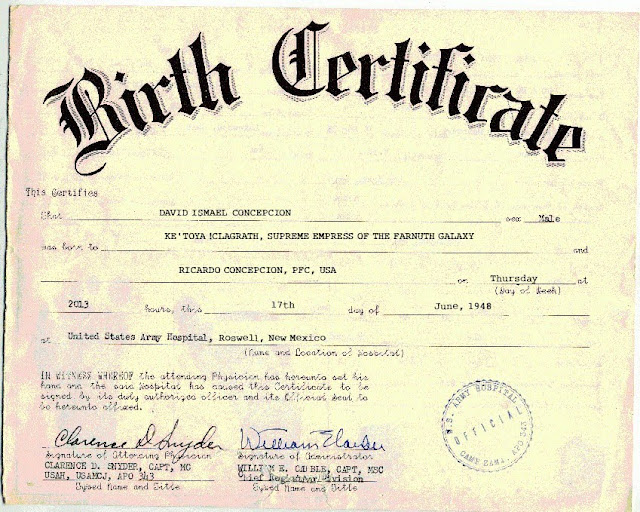 I spoke with one of the local historians of Chaves county, New Mexico, a Mrs. Mildred Entwistle. She said that,

Yes, it is true. Mr. Concepcion was born right here in Roswell. We had that alien crash in '47. The government people got a few of them alien bodies, but there'd always been rumors that those were just guards. The queen of the aliens landed safely and hid up in Clem Elmway's shed out on Route 380, to the west of town. She wasn't much to look at, they say, but she asked for one of the Army fellows to come for some sort of mating ritual. That was in the late fall. Around Thanksgiving time. Anyway, a private, a guy from Venezuela, Ricky, we called him, drew the short straw. About seven months later, here's this little baby. I guess they've got a different gestation period. Clem said that the queen alien didn't have anything for the baby to suckle on, and Ricky had already married one of the Benetiz girls working at the commissary. They took little David in and raised him. Didn't hear anything more about that queen alien, but Clem had a big fire there on Fourth of July. Said it was fireworks that caused it. Yeah. Right.
That little alien half-breed did okay growing up. But he had big eyes. I guess that helped him when he moved up to Ohio and started playing ball. He could just see where those fellows were going to hit that ball. I never liked baseball. They got those Isotopes up in Albuquerque. You know that Manny fellow they had with them in the spring? I bet he's an alien, too.

I thanked Mrs. Entwistle for her time. She told me that if I call her again it should probably be from a pay phone.
Posted by Mark Aubrey at 11:06 AM