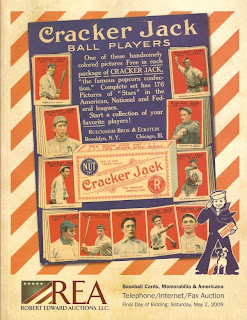 Here's the new Robert Edward Auctions catalog. I received it via UPS Red the second week of April. For the last few weeks I've been looking over it, almost lusting over some of the items that they offer. Almost.

The bulk of the catalog deals with baseball although some football, basketball, boxing, hockey and non-sport crop up towards the end. 1,558 lots crammed into 642 full color pages. Do not read this while standing over small children. Should you drop it, serious harm could be inflicted.

I decided to give into my auction fantasy and wondered what damage I could do with $10,000. As I selected items, I only kept the tally on the reserve price. For reference, I've included the current (as of Friday evening) prices. When the auction is over, I'll count the real cost.
I selected items that I'd want to own. Some of the items in the catalog didn't do much for me. I don't really think I'd want a jersey. I'd take a signed baseball, though I didn't include it in my "purchases."
My favorites are the 1953 Pee Wee Reese card and the 1948 Leroy Paige card, with the T3 Turkey Reds coming in a close third. I like the Pee Wee Reese card because of the action. I like the Leroy Paige card because of the look on his face. It doesn't matter that it is his rookie card.

That being said, here are my selections...

As a bonus, REA included a magnet with the catalog. It is the cover of the catalog. Right now it is keeping a recipe for Hearty Lentil Soup firmly attached to the side of the fridge.
The auction ends on Saturday.
Posted by Mark Aubrey at 10:25 PM