Back in July Paul H., a fellow member of SABR, asked about the location of the Star Park in Covington, Kentucky.  Paul runs Project Ballpark.

A few members answered Paul, including me.  I hopped on Google and searched.  I found it.  Clearly the Internet is paying off.  Here's what I found.

As I looked at it the info was rather vague. "Just across the river from Cincinnati, Ohio".  Really?  That's an awful lot of shore.  I found a map of Covington from 1874, but it didn't show any ball park.

Wait.  The Philadelphia Pearls?  Was that really a team?  A bit more research told me that from 1873 to 1875 the Philadelphia team in the National Association was named the White Stockings (also known as the Whites or the Pearls).  Who did they play?

More searching led me to this 1883 map from HistoricMapWorks.com.   Eight years after the ball game had been played.

A bit more poking around and I found this non watermarked version.  I don't remember exactly from where I retrieved it. 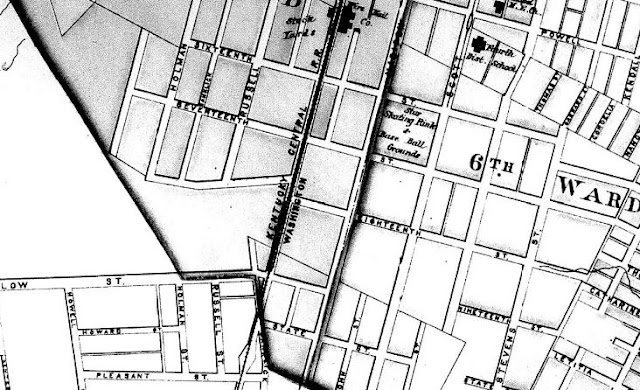 So, there it was.  On the northwest corner of Scott and Seventeenth.

I emailed Kevin at Seamheads of the good news so that they could update their BallParks database.  They moved the pin on Google maps a bit closer from where they had it, but it still isn't right.  I need to gently nudge them. UPDATE: I reached out again to Kevin at Seamheads and they said they'd move their pin based on this research, as it "is the best available evidence we have."  He likes to use Sanborn Fire Maps.

On the family vacation that we took at the end of July, we were just minutes from Covington on our way back home.  I asked my wonderful wife if we could take a short tour of the town "Just across the river from Cincinnati, Ohio" and try to find the old ballpark, knowing full well that it wouldn't still be standing.  She said, "yes" and didn't even roll her eyes.  She's wonderful like that.

I've never been to Covington.  Driven by it countless times.  Parts of it seem really nice.  They're doing some renovation, but the town, like scores of others across the land, has seen better days.


Back to 1875.  September 21 was a Tuesday.  What was a team from Philadelphia doing in Covington, Kentucky?  And who did they play?  Back to the Internet.

According to the Encyclopedia of Northern Kentucky the White Stockings' opponents were the Hartford Dark Blues.
According to RetroSheet's Events of Tuesday, September 21, 1875 page, it was the only game played that day and the the score was 13-9, Philadelphia.

So, what did I learn?  I learned that answering a question for a fellow SABR member can be interesting rewarding.


UPDATE 2: Kevin from SeamHeads indicated that he trusts Sanborn Fire Insurance Maps a bit more than other maps. I did a bit more searching and found two Sanborn Maps at the Kentuckiana Digital Library.

I modified the first image by including the scale on 17th Street.  The second image did not have street names near the block I cropped, but it is the same block as the first image.  There is no ball ground listed, but I could imagine the vacant space in the southwest corner of the block could house a baseball field.