In the never ending series of blog posts that some might interpret as a love fest for Mr. Night Owl but really isn't, I present yet another card that Greg sent me. 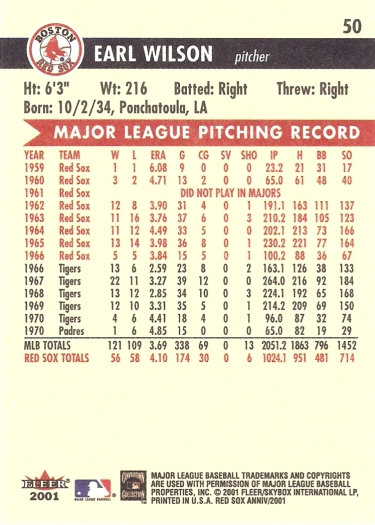 This is one of my Elusive Eight cards.  Well, now that list is down to seven. I'll have to find another Earl Wilson card to take the place of this one.

I think I put that page up because everyone else was doing it.  Nefarious Nine.  Sought-after Six.  Flappable Five.  Okay, now I'm making them up.  But it worked.  I can only assume that Greg found my narrow wantlist and helped me knock it down.

You know what else works?  Zistle's new Customized Collections feature.  Here are the Earl Wilson cards I own. Try it, you'll like it.

Thanks, Greg, for the Earl Wilson.  Just a few more of these posts and you'll be released from me splashing your name all willy-nilly.
Posted by Mark Aubrey at 11:10 PM