While looking through some Diamondback cards with my dad I eyed this 2001 Fleer Triple Crown card of Jay Bell (card # 119). 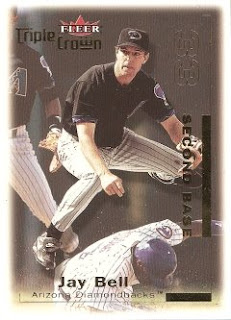 I think that Mr. Bell is avoiding Eric Young who is trying to break up a double play.  My other guess is that the extra leg belongs to Tony Womack, shortstop for the D-backs. 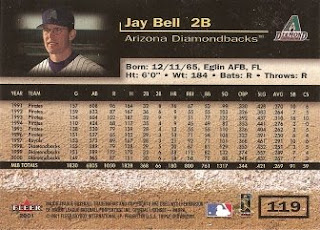 This two time All-Star (1993 & 1999) has a World Series ring (2001) and has gracefully suspended his 184 lb. body in mid-air for 8 years now.  Okay, maybe not gracefully.  But eight years is a really long time, graceful or not.
Maybe being born at the Eglin Air Force Base gives some clue.  Perhaps his father was involved in some sort of secret, invisible, hovering aircraft project and Jay stole a miniature version.
Posted by Mark Aubrey at 11:35 PM